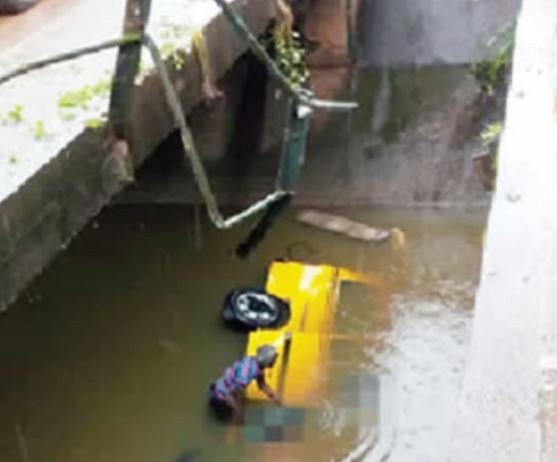 Four persons have been confirmed dead as an 18 seater bus plunged into the Black River, a tributary to River Niger in Koton Karfe, Kogi State.

Confirming the sad incident, the state Sector Commander of the Federal Road Safety Corps (FRSC), Solomon Agure, said that the accident occurred around 7.30pm on Tuesday.

According to Agure, four people, including a woman, died in the accident while seven others were critically injured.

Agure added that the bus with registration number Plateau – JJN 73 XA, took off from Ijora Seven Up under bridge in Lagos and was heading to Kano.

The FRSC commander, however, revealed that the driver lost control of the vehicle after sleeping off.

The state Commandant of Nigeria Security and Civil Defence Corps, Suleiman Mafara, said after receiving a distress call, his men in conjunction with FRSC officials and volunteer divers headed to the scene.

Marafa said four corpses have already been recovered and 13 others were rescued alive while one person could not be accounted for.

He added that his men and other Security personnel were working to recover the only person yet to be accounted for.

Marafa said that the recovered corpses have been deposited at a mortuary in Lokoja.

He sounded a note of warning to drivers and commuters to adhere strictly to the road safety guidelines so as to avoid preventable road mishap on the highways.