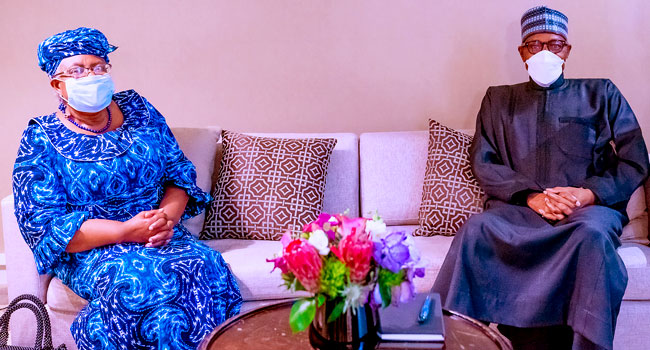 Naija News reports that the President met with the former Minister of Finance alongside the Minister of Foreign Affairs, Geoffrey Onyeama, ahead of the 76th session of the United Nations General Assembly.

Speaking to reporters, Onyeama stated that the duo discussed getting manufacturers of vaccines to invest in production in Nigeria, and Africa at large and help economies recover faster. 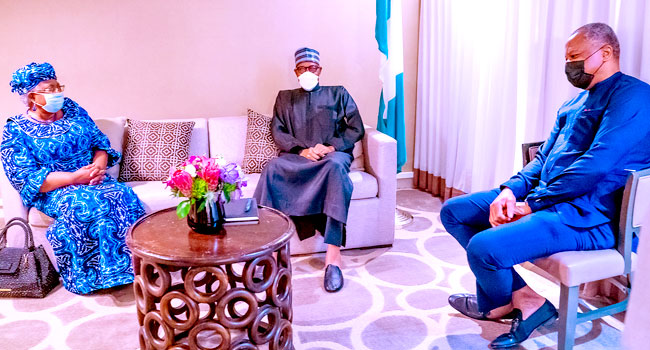 The minister added that Buhari will be delivering a speech while addressing world leaders at the UN Headquarters on Friday.

He said: “Mr President is going to be addressing the world.

“So, what we will see from this is Nigeria’s vision, Mr president’s global vision on key issues of priority like development, climate change, security, women empowerment, good governance, anti-corruption, illicit financial flows, and restitution.”

The minister added that President Buhari has been engaging top government officials in strategic meetings and will take part in some high-level meetings.

These include among others, the High-Level Meeting to Commemorate The Twentieth Anniversary of the Adoption of the Durban Declaration and Programme of Action on the theme “Reparations, Racial Justice and Equality for People of African Descent.”

The President is expected back in the country on September 26.

Meanwhile, the success story of how President Buhari managed Nigeria’s economy during the global COVID-19 pandemic will be a part of his speech at the 76th session of the United Nations General Assembly.

The hint was dropped on Monday by the special adviser to the President on Media and Publicity, Femi Adesina.

According to the presidential spokesperson, the Buhari administration was not only able to recover from the effects of the pandemic but took it a bit further to record growth at a time when many nations of the world are still battling recession caused by COVID-19.

He recalled that the Nigerian economy “recorded a GDP growth of 5.01,” and the President will share with other leaders how the feat was achieved despite the global pandemic.

Adesina made this known during his interview with Channels TV on Monday night.

He added that President Buhari will also “talk about security. He would talk about the girl child, SDGs, and so many things.”