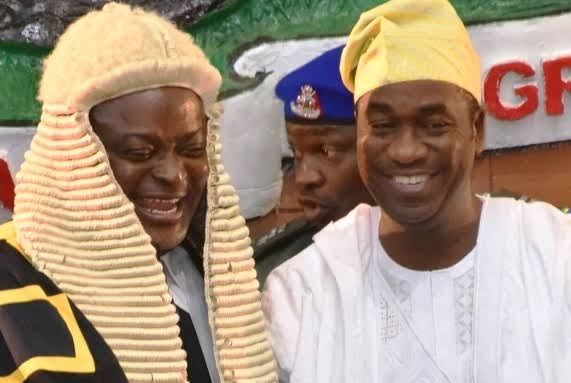 The Speaker of the Lagos State House of Assembly, Mudashiru Obasa, has congratulated the State’s Deputy Governor, Obafemi Hamzat, as he clocks 57 years.

In a statement signed by Obasa’s Chief Press Secretary, Eromosele Ebhomele, the Lagos Assembly Speaker described Hamzat as an important team-player whose contributions to governance and growth of Lagos cannot easily be quantified.

Speaker Obasa said Hamzat, a technocrat and goal-getter, has remained a brother who has brought his expertise to bear in the progress of Lagos.

According to the statement sent to Naija News, the speaker described the deputy governor as a reliable party man whose goals align with the collective zeal of leaders of the State to keep Lagos developed, stable and responsible.

“Hamzat is a committed Democrat, administrator and one who is greatly appreciated for his whole-hearted contributions to the growth and progress of our dear State.

“He has constantly shown himself an important team player and this has helped us in the government to keep aiming at the moon in our zeal to make Lagos one of the best places, not just in the country, but among notable cities across the globe.

“Congratulations, dear brother, friend and team player as you clock 57 today. Thank you for keeping the Lagos flag flying.

“I appreciate you for your contributions to governance and urge you not to relent in your love for Lagos.

“I pray that God will increase you in wisdom, give you special strength and good health so that you can remain of service to humanity,” the statement said.