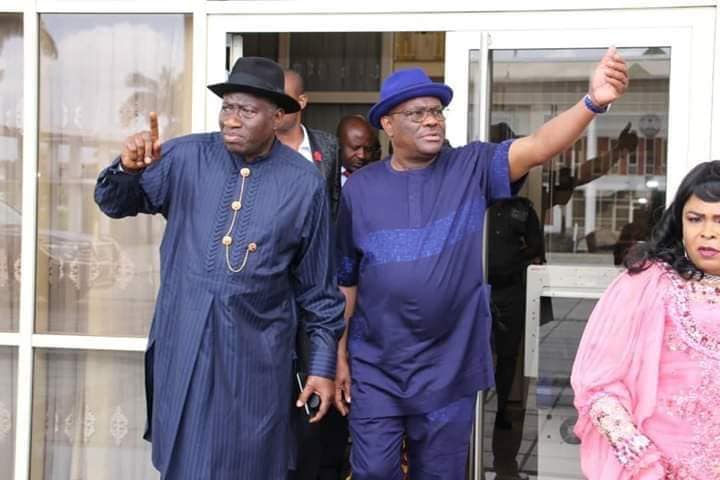 The Governor of Rivers State, Nyesom Wike, has said he will turn his back on former President, Goodluck Jonathan, if he ever defects to the All Progressives Congress, APC.

Naija News understands there have been rumours circulating the cyberspace that Jonathan is on his way to dumping the Peoples Democratic Party (PDP) to join the ruling party.

The assertions, however, have been debunked by the former leader, Naija News reports.

Governor Wike who hails from the same South-South region as Jonathan, has vowed not to support Jonathan if he defected to APC to contest in the 2023 presidential election.

In an interview with BBC Pidgin on Friday, Wike said Jonathan will only receive his support if he runs for the presidency on the platform of the main opposition party.

He said: “When you said pick ticket, from which party? Is it APC or PDP?.

“To pick ticket means you’re representing the interest of a party. I’m in PDP and I will not be involved in anti-party activities. If he is APC, I won’t support him because I’m not into that kind of politics.

“It is not about ethnicity for me, but about the party. If he joins APC I can’t support him.”

Meanwhile, APC has said it will welcome the former President should he consider joining the party.

National Secretary of the party, Senator John Akpanudoedehe said this while answering questions on a Channels Television Political Programme, Politics on Thursday.

Akpanudoedehe said like every other new entrant, Goodluck Jonathan if he eventually joined APC, would enjoy the rights and privileges extended to all members of the party.

According to him, the joining date of any new member won’t be a determinant for contesting any post.

Responding to a question on whether APC is truly wooing Jonathan to join the ruling party to become its Presidential standard-bearer for 2023, Akpanudoedehe said, “I don’t want to speculate.”

He added: “Everyone is allowed to join the APC, we welcome everyone who wants to join. We are getting stronger in terms of our progressive agenda. I’m hearing that for the first time, if he comes, we will welcome him, that will be great news.

“The last National Executive Committee meeting gave a blanket approval to everyone who wants to join the party and anyone who joins the party has the right to aspire for any office.”