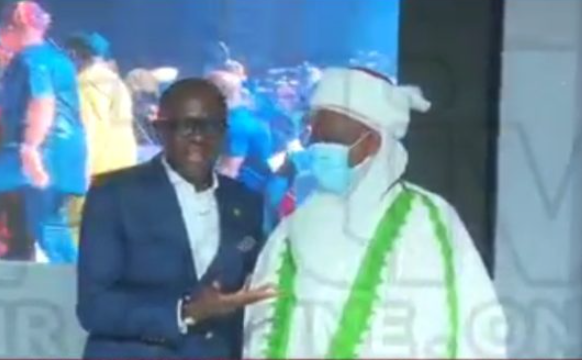 A viral video broadcast by Africa Independent Television (AIT) shows that the first-class monarch allegedly snubbed the governor at the 2020 Leadership Conference and Award held in Abuja last Thursday.

Naija News understands that the event was attended by Vice President Yemi Osinbajo, Ministers, Governors, politicians among other dignitaries.

But in a statement on Wednesday signed by the Commissioner of Information and Strategy, Gbenga Omotosho, the Lagos state government denied the video that the governor was snubbed by the Sultan.

Omotosho stated that the video is mischievous and, therefore, condemnable for attempting to destroy the image of the governor and the Sultan.

The commissioner berated the media house for trying to cause disaffection between Governor Sanwo-Olu and the Sultan.

The statement added that it is not possible for the Sultan to contemplate snubbing Governor Sanwo-Olu or any other governor in Nigeria.

He, therefore, urged members of the public to disregard the video and continue to support the Sanwo-olu government.

The minister made the remarks on Tuesday, linking the crisis to a lack of education in Nigeria, warning that if left unchecked, the country could collapse completely.

He made the remarks at a joint economic forum hosted by the Ministry of Special Duties and Intergovernmental Affairs in Abuja, the Nigerian capital.

“We are facing a problem that is cyclic, one begat the other. It is left for you and me the elite to decide to save ourselves, save our children and save our country. Ngige said.

He warned on the imminent dangers ahead: “If we keep on with these symptoms; buy ammunition, bomb these people, bomb kidnappers, bomb Boko Haram, you will be wasting resources.

“Those who can’t get an education, we must provide them jobs so that they can fend for themselves. They can put a roof over their heads.“