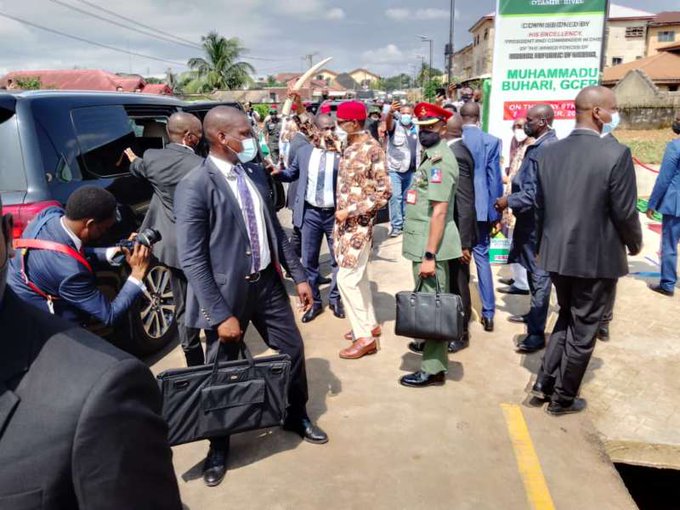 Details of the discussions between President Muhammadu Buhari and community as well as political leaders of the southeastern people on Thursday have emerged.

Naija News understands the Igo leaders expressed their minds and made some demands from Buhari during the closed-door meeting held during the President’s visit to Imo State.

As earlier reported by this online news platform, journalists were shut out from the meeting which held at the newly commissioned ultra modern executive chambers at the Imo Government House, Owerri.

In attendance at the parley include the Ebonyi State Governor, David Umahi, and the Abia State Deputy Governor, Ude Okechukwu.

Others present at the closed-door meeting include the President General of Ohanaeze Ndigbo Worldwide, Prof George Obiozor; Minister of Foreign Affairs, Geoffrey Onyema; Minister of state Chief Uche Ogar: and other leaders of the All Progressives Congress (APC) in Imo and the southeast.

Reports have it that the President of Ohanaeze Ndigbo, George Obiozor told Buhari that Igbos don’t want to be treated as second-class citizens in their own country.

He said if the government addresses the feeling of been left out of governance which gets rubbed in their faces many a time, the agitations coming from the zone to break away from Nigeria will be curbed.

Additionally, the Igbo leaders used the opportunity to give the commitment of the Igbo nation to a united Nigeria.

Obiozor noted that there is no place in Nigeria that you won’t find an Igbo person which is a testament to the fact that Igbo people are travellers who cherish the accomodation of their host communities.

He however demanded that President Buhari shows equity, justice and fairness in governance which he observed a lack of it is the major factor driving agitations of secceesion by some people from the region.

During the meeting, the Igbo leaders also demanded more federal presence in the region in the form of infrastructure, employment for the youths and economic investments.

He said: “Mr. President, in spite of all the threats of secessionism or separatism facing the country, there is no doubt that no secessionist element can succeed in Nigeria provided there is good governance based on equity, justice and fairness to all the citizens.

“Ndigbo is committed to Nigerian unity and there is news for those trying to push us out of Nigeria. Ndigbo in Nigeria are like fish in the ocean, no matter how rough the storm is, it cannot drive the fish out of the ocean.

“Your Excellency, the most urgent and imperative need of Ndigbo today is security. The security of Ndigbo in Nigeria and beyond has become a compelling primary responsibility of serious concern for Ndigbo. Regrettably, our South East Zone has recently become a theatre of conflict, negating the peace-loving nature of our people.

‘However, the South-East zone is in dire need of more infrastructure sponsored by the Federal Government amongst these are roads, bridges, railways and ports. It is the considered view of Ohanaeze Ndigbo, one that is also shared by the Igbo people that federal investments in these critical areas will revitalize the economy and will have the tangential effect of dousing the youth restiveness and unemployment in the zone.

“Mr President your visit and presence today in Igboland and Owerri, Imo State in particular has more than political significance. In the manner of symbolism, this visit has thrown light into the cloudiness and doubts surrounding the perception of the relations between your Government and Ndigbo. Your presence reassures us that there is still reason for optimism for Nigeria and Nigerian unity.

“I feel very pleased in my capacity as President General Ohanaeze Ndigbo Worldwide and on behalf of the galaxy of Ndigbo leaders gathered here today, and the entire Igbo Nation, to welcome Your Excellency wholeheartedly to Igboland. It is also our firm belief that this visit will mark the beginning of a new chapter of dialogue, cooperation and understanding between Ndigbo and your administration.

“Mr President, after all, Nigeria has gone through in its nearly sixty years of the chequered history of crises and continuity and the spectacular patriotic role of Ndigbo to ensure its unity and survival, the consistent perception that the Igbos are separatists and secessionists agitators is a historical fallacy.

“Indeed, if the truth must be told, Ndigbo are the most federating unit among all Nigerian citizens. Generally speaking anywhere in Nigeria you don’t find the Igbos, run away something is wrong there. Igbos are market people and travel adventurers. Consequently, what defines the Igbo character is a propensity for friendliness and harmonious peaceful coexistence and the spirit of the universalism of mankind. This is who we are. Our Igbo adage says “Ojemba Enwe Iro”, literally translated – A traveller makes no enemies.

“Also another misconception of Ndigbo is that Igbos cannot speak with one voice, ironically that is another fallacy, there are more things that unite Ndigbo than divide them. But the Igbo spirit defies conditions that are obstacles to the expression of their individual or group opinion. This sense of egalitarianism is what defines the Igbo system of governance based on liberal democracy and social justice.

Mr President, it is in this context, that we see a new dawn in your distinguished presence in Igboland and believe that on your return to Abuja the significance and substance of this visit will form a new foundation of a platform for meaningful dialogue on critical issues of concern to the Igbo Nation.

“Mr. President, we appreciate the infrastructural work being undertaken by the Federal Government in the South East such as the 2nd Niger bridge. It symbolizes unity and a bridge across the various regions of the country. However, the South-East zone is in dire need of more infrastructure sponsored by the Federal Government amongst these are roads, bridges, railways and ports. It is the considered view of Ohanaeze Ndigbo, one that is also shared by the Igbo people that federal investments in these critical areas will revitalize the economy and will have the tangential effect of dousing the youth restiveness and unemployment in the zone.

“In conclusion, Mr President, nothing is more important to the Igbos in Nigeria today, more than the restoration of a serious sense of belonging and the spirit of Nigeria’s founding fathers based on one nation, one destiny. And we believe this is possible through the Devolution of Power ensuring a sense of balance in our political system. Thank You.”

President Buhari during the meeting was said to have assured the delegates of a more inclusive government and promised to complete the second Niger Bridge and other major projects in the region.

He urged them to convince their people to allow peace reign as no meaningful development can be achieved without a peaceful environment irrestpective of government efforts and commitments.