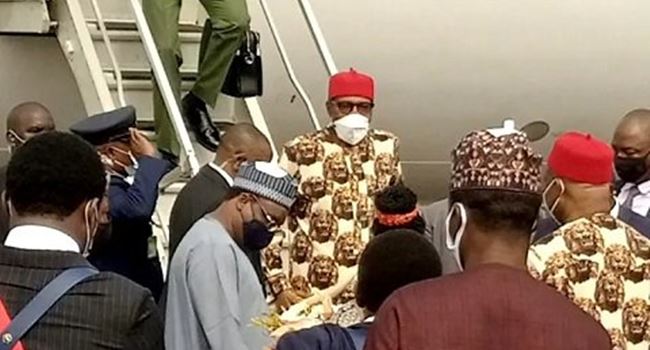 President Muhammadu Buhari has made fresh promises to the people of Imo State.

Buhari had visited the state on Thursday (today), to commission projects which include Naze-Nekede-Ihiagwa-Obinze Link Road Phase One, an underground tunnel on D-Tiger Road Owerri, the Egbeada Bye-Pass, and the new State Executive Council Chambers at the Government House, among others, Naija News reports.

Speaking at the colorful event, Buhari assured the state Governor, Hope Uzodinma, that he would help him fight security challenges ravaging the state.

He also promised to assist the governor to deal with infrastructural deficits of the state.

He was received by Governor Uzodinma, state government officials, and some members of the All Progressive Congress at the Sam Mbakwe Airport in Owerri, about 09:30 a.m.

Commissioning the Egbeada-Onitsha bypass road in Owerri in the presence of royal fathers and other dignitaries, Buhari said that he was impressed with the level of development in the state.

He said that no society would make any meaningful progress in the face of insecurity and infrastructural deficits.

Buhari said that his vision of having a secured Nigeria with huge infrastructural progress had marched with what Uzodinma was doing in the state.

The president said, “I have gone round and I am impressed with what I saw. A society without security and infrastructure will not progress and lucky this is where my vision has tallied with the governor of Imo state. I will use my power as enshrined by the constitution to make the governor achieve more.”

Earlier in his speech, the governor urged the president to deal permanently with the issues of insecurity and flooding which he said was ravaging Owerri, the state capital.

Meanwhile, the Imo chapter of the Peoples Democratic Party (PDP) has described the planned visit of President Muhammadu Buhari to the South-East state as “callous and inhumane”.
Naija News reports that President Buhari is scheduled to visit the state today, Thursday, to commission some projects executed by the Hope Uzodinma administration.

In a statement issued on Wednesday, the Imo PDP through its spokesman, Ogubundu Nwadike, said the presidential visit to the state is of no value to residents of the state.

The PDP added that the presidential visit to Imo is a deliberate ploy to mock the people of the state to their very face.

The opposition party, however, advised the President to use the occasion of his visit to right the grave wrongs he has done to the people of the state.