There has been an outbreak of the Nipah virus in India which has led to the death of a 12-year-old boy.

The Nipah virus which is way deadlier than Covid-19 is feared to be the next virus that might plague the world. The virus has a high rate of mutation and has no cure yet. The World Health Organization has stated that the virus mortality rate ranges from 40 to 75% which is quite excessive compared to Covid 19’s 1%.

The center for Disease Control and Prevention has said: “The virus has been shown to spread from person to person in these outbreaks, raising concerns about the potential for NiV to cause a global pandemic.” 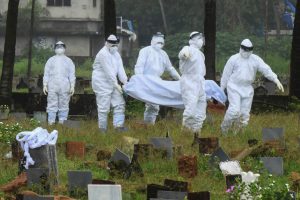 People in protective suits prepare to cremate the body of a 12-year-old boy died of the Nipah virus in Kozhikode, Kerala state, India, Sunday, Sept.5, 2021. The southern Indian state is quickly ramping up efforts to stop a potential outbreak of the deadly Nipah virus, even as it continues to battle the highest number of coronavirus cases in the country. (AP Photo/Shijith. K)

The virus was spread from pigs to farmers in Malaysia in 1999 and has an incubation period of 45 days which makes it possible for a person to transfer it before the symptoms start showing.

According to some reports, the 12-year-old boy had visited some hospitals which had left him exposed. His immediate contacts were also tested for the virus and they came back negative.