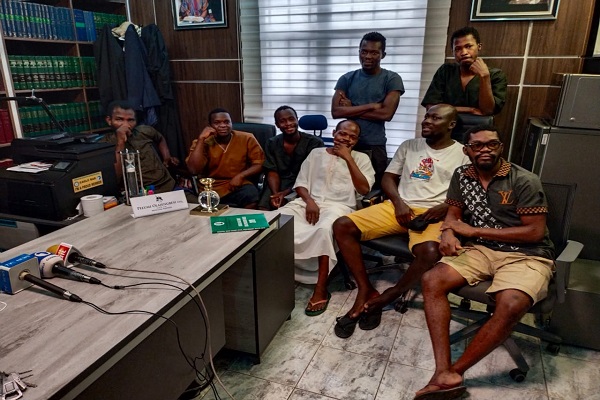 Pelumi Olajengbesi, counsel to the aides of  Yoruba Nation agitator, Sunday Adeyemo popularly called Sunday Igboho, has threatened to take legal action against the Department of State Services for what he described as selective obedience of court orders.

Olajengbesi’s threat is coming on the heels of the decision of the DSS to release two out of the four remaining aides of Sunday Igboho despite the order of the court for the detainees to be released.

According to Olajengbesi, only Tajudeen Irinloye and Uthman Opeymi Adelabu were released on Friday while both Amudat Habibat Babatunde and Jamiu Noah Oyetunji are still in the custody of the secret police.

He said the DSS didn’t give any reason for the decision for refusing to free the detainees.

Olajengbesi said the legal team had met all the conditions and perfected all things as directed but the DSS would still not release the remaining two aides of the Yoruba Nation agitator.

In a statement entitled “DSS selective obedience to court order; an affront to and disregard of the authority of the court”, the lawyer noted that the DSS simply lacked the power to select or unilaterally handpick which order of court is convenient for it to obey or honor.

He said: “The keenly observing world will recall that during our last press briefing on the on-going case of Chief Sunday Igboho’s aides, it was reported that the DSS is yet released four of detainees on their custody on grounds of bail perfection technicality, in which we were allowed to secure the release of others.

“Sequel to the refusal of the DSS to release the other detainees, concerted efforts were immediately made to resolve all technical issues raised by the DSS. Accordingly, on Friday the 3rd of September, 2021, all issues raised were resolved and we proceeded to the Headquarters of the DSS to demand the immediate release of the four remaining detainees in their custody.

“Regrettably and in the whimsical habit of the DSS, only two of the remaining four received their freedom while the other two namely; Amudat Habibat Babatunde and Jamiu Noah Oyetunji, remain in the unlawful custody of the DSS. No valid reasons on law were availed the Legal Team for this willful disobedience of the rule of law and court.

“The DSS’ cherry-picking of an order of court is an open dare and affront on the authority of the issuing court and it lacks legal backing under the extant laws of Nigeria. It is a condemnable action in any sane democratic society and speaks ill of the professionalism of the intelligence agency.

“The DSS simply have no right nor power to select or unilaterally handpick which order of court is convenient for it to obey or honor. Any iota of non-compliance to an order of court is tantamount to disregard of such an order in its entirety and same is contemptuous.

“Consequently, we want to restate that if by Monday the 6th of September, 2021, the DSS continue with their unlawful detention of the remaining two detainees, we shall not hesitate to proceed with our earlier plans to institute a contempt proceeding against the Director-General of the DSS, Yusuf Magaji Bichi.

“The DSS as a law enforcement agency should not be allowed to carry out its official responsibility with impunity and absolute disrespect to the law of the land, especially where the constitutional rights and liberty of citizens are at stake. It is reprehensible conduct unbecoming of an agency which is itself a creation of the law and it will not go unchallenged.”