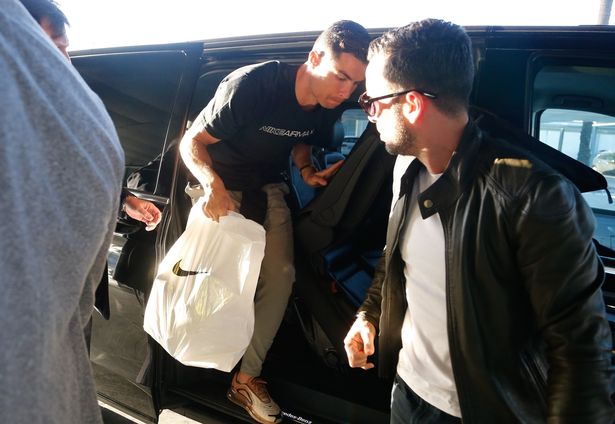 International goal record-breaker, Cristiano Ronaldo has arrived in Manchester days after agreeing to a two-year contract with the option to extend for another year with Manchester United.

The Portuguese forward who joined the club from Serie A side Juventus arrived at a private terminal at Manchester Airport and was welcomed by the club’s technical director, Darren Fletcher.

The 36-year-old was released early from the Portugal squad after picking up a suspension for celebrating his stoppage-time winner in a 2-1 World Cup qualifying win over the Republic of Ireland.

It was the second of two goals that saw the forward create a new world record for international goals scored (111).

Ronaldo, who will once again wear the iconic No 7 shirt, is expected to feature for Ole Gunnar Solskjaer’s side in the Premier League clash against Newcastle United at Old Trafford on Saturday, September 11.

He has also been included in Manchester United’s 25-man Champions League squad, with the first game against Swiss side Young Boys on Tuesday, September 14.

Ronaldo has expressed his delight to be back “home” at United and is hungry to create more history with the club.

The five-time Ballon d’Or winner’s return to Old Trafford was made official on Tuesday morning, as he signed a two-year deal with the option to extend for a further year.

Ronaldo scored a total of 551 club goals across spells at Real Madrid and Juventus after leaving United in 2009, and in an interview with the club, the 36-year-old said it is now the right moment for him to return.

Ronaldo told the official Manchester United website, “I have a fantastic history with this amazing club. I was there at 18 years old and of course, I’m so happy to be back home after 12 years. So I’m really glad and looking forward to starting my first game.

“I think it’s the best decision that I have made. It’s right on point in my opinion.

“I moved from Juve now to Manchester, it’s a new chapter, I’m so happy and glad, and I want to carry on again, to make history, to try to help Manchester achieve great results, to win trophies and number one of them, to win great things.”