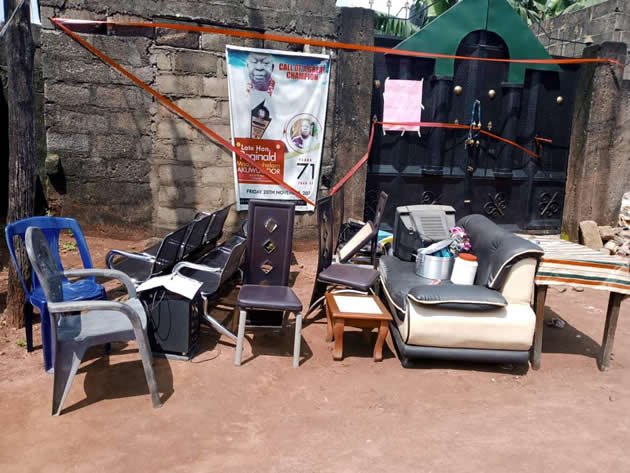 A widow in Owerri, Imo State has cried out for help after her late husband’s brother evicted them from their apartment.

The single mother of four who was visited by journalists said her brother-in-law came with thugs and some men in uniform on Tuesday to send them out of the house ‘solely’ built by her late husband.

Mrs Rosena Akuwuodor said her husband Reginald Akuwuodor had died on September 9, 2020, and was buried on November 20, 2020.

Weeping bitterly over the incident she explained further that Maxwell Akuwuodor, her late husband’s brother harassed her and the four children she bore for his sibling.

The 49-year-old woman lamented that they have not eaten since the incident happened, adding that Akuwuodor threw their belonging outside and locked the gate to the building.

She said, “My husband’s only surviving brother, Maxwell Akuwuodor, evicted me and my four children from my husband’s house on Tuesday. He threw out our loads and locked the house. This was a house built by my husband. He said he had obtained a judgment against my husband, which is not true.

“As I speak with you, I am homeless. We have not eaten since yesterday. We have no place to go. We have neither taken our bath nor changed our clothes. The world should come to my rescue. I am a poor widow with three girls and a boy.

“He threw away everything that belongs to us inside a house built by my husband, including the credentials of my children. The house is a five-bedroom bungalow.”

However, when interviewed, Maxwell, told reporters that the eviction was carried out by the staff of the Owerri High Court.

According to him, he got a judgment against the widow’s husband on a matter of rightful ownership of the ancestral land.

But counsel for the widow, Uche Ubochi, said the court ruling was wrongly executed. Ubochi said the court didn’t say that the widow and her children should be evicted from her husband’s house.

He noted that the judgment permitted Maxwell to take over another house said to have been built by his father (widow’s father-in-law).