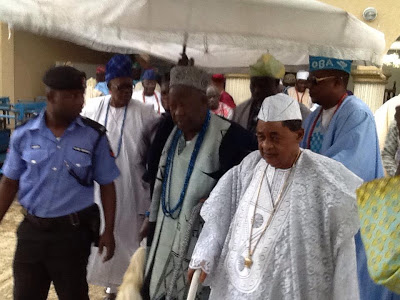 Three prominent monarchs in Oyo State were stopped by the operatives of the Department of State Services (DSS) from the official commissioning of the remodelled Lekan Salami Adamasingba Stadium, Ibadan.

Naija News gathered that the Alaafin of Oyo, Oba Lamidi Adeyemi III, the Olubadan of Ibadanland, Oba Saliu Adetunji, and the Aseyin of Iseyin, Oba Abd-Ganiy Salau, were barred from attending the event on Wednesday.

It was learned that the DSS operatives refused to allow the monarchs and their aides into the stadium for about 30 minutes.

Later, the security agents at the gate reportedly insisted that just one of the aides would be allowed to go in with each of the traditional rulers.

Following the comments made by the DSS operatives, the monarchs and their aides were said to have left the stadium in anger.

Confirming the incident to reporters, Olubadan’s spokesman, Yanju Adegboyega, said the three traditional rulers were stopped from gaining access to the stadium.

He added that it was very wrong and disturbing for overzealous security agents to stop the monarchs at the first instance.

Adegboyega stated that the DSS operatives stopped them from entering the stadium despite the monarchs showing them their Very Important Personality (VIP) Invitation Cards.

He said: “Olubadan, Alaafin of Oyo and Aseyin of Iseyin were at the entrance to access the stadium but overzealous security officers stopped them.

“We were prevented from entering the stadium. The DSS and bouncers did not allow us to enter.

“They said they can only allow the monarchs to enter if they can only go in with just one aide. Olubadan had no option but to leave, Aseyin also followed us.

“Quote me, I am the Assistant Director of Media.”

Also confirming the incident, spokesman to the Alaafin of Oyo, Bode Durojaiye, said his principal was prevented by DSS operatives from attending the Lekan Salami stadium inauguration.

He said, “My brother I’m so sorry. Overzealous security agents prevented the Alaafin.

“I did not go but I have just been briefed.”