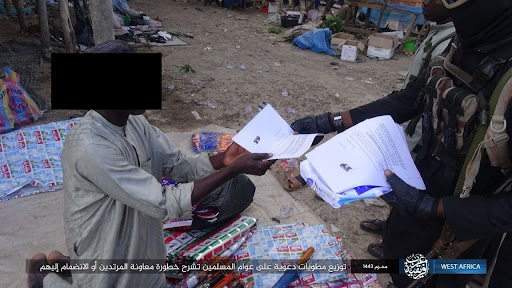 Fighters loyal to the Islamic States of West Africa Province (ISWAP) have warned residents of Borno State against cooperating with the soldiers of the Nigerian Army.

This is as the terrorists in their latest act of propaganda took it upon themselves to storm the streets and share fliers to the residents of some areas in which the terror group observed they are not the enemies of the people.

The terrorists in the fliers told the residents that the soldiers are the ones responsible for displacing them from their villages and destroying their property.

Naija News gathered from a report monitored on Humangle that the terrorists carried out the action in parts of Borno State where they control. 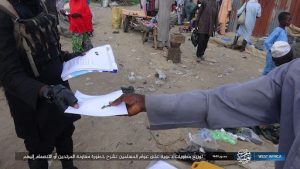 The fliers titled “A message from the caliphate’s troops to the people of a new town” were reportedly shared in a place that looked like a market while another ISWAP fighter was cited giving the flier to a driver that looks like a taxi.

Some others were also posted on the walls of houses in the area. 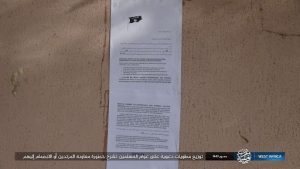 It was gathered that the gunmen had broken into the secondary school on Wednesday morning.

The bandits gunmen who came on motorcycles stormed the school shooting sporadically.

A teacher in the school told the BBC Hausa that he and others managed to escape by running away under the cover of farms near the school.

He disclosed that the bandits stormed the school in the hours of 11 am and 12 pm.