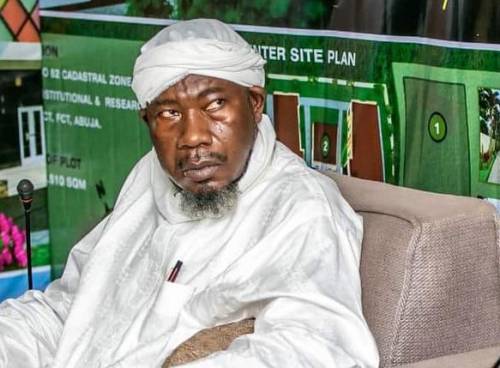 President Muhammadu Buhari has been called out by the Chief Imam of Apo Legislative Quarters Mosque, Sheikh Nuru Khalid, over his soft approach to ending banditry in the country.

The security challenges across the country have seen prominent Nigerians condemn the president for how he is tackling the issue.

The Islamic cleric in a video stated that Allah (God) will deal with President Buhari if he fails to return Nigeria to a state without bandit terrorists.

Khalid while addressing worshippers in a sermon on Friday, said the Buhari must end the security challenges in the country before leaving power.

The Islamic cleric who spoke in Hausa, said, “Go and tell the President that under his government some groups of people are issuing threats to local communities, demanding that they should be paid some amounts of money or face attack.”

“And they would gather the money and announce publicly on the BBC that they (bandits) would be paid this Friday [to avoid attack].”

“Tell the president that there is a country we pay allegiance to, and there is a part of the country we do not know, which is governed by bandits.”

“The president should either return the country as one nation where bandits are not killing people anyhow just the way he took over, or Allah (God) will deal with him.”

“This is the message. I’m saying this in an open forum, and it is live-streamed for the world to see. I take responsibility for my words, and I’m ready to face whatever consequences for preaching peace and unity of Nigeria.

“We have a video in which you said Nigerian soldiers had the patriotism, training, and discipline to tackle all manner of criminality in the country. You said if you were elected, you would give them the required support to tackle insurgency in a short time.

“Your Excellency, a promise made is a promise kept. If you lack the advisers to remind you of this, we are ready to tell you. We are praying to God to help you fulfil this promise if you are willing.”