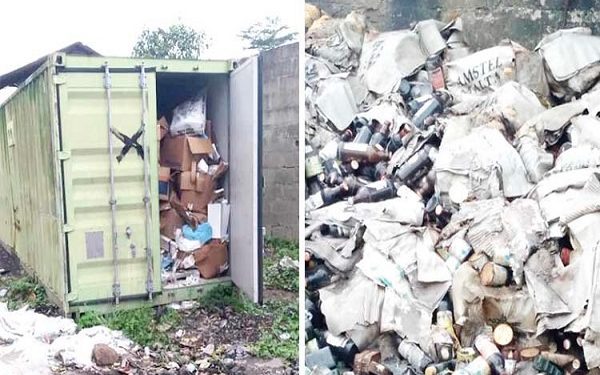 Despite mounting concerns over Nigeria’s solid waste current growing at 32 million tons annually, more toxic materials have been uncovered at scrapyards tucked in residential neighborhoods in Ikorodu and other parts of Lagos State.

This has made the General Manager of the Lagos State Environmental Protection Agency (LASEPA), Dr Dolapo Fasawe, warn that “if these activities go on unchecked the State would (among other dangers) be in a huge environmental and food safety crisis”.

Naija News reports that the discovery at Ikorodu was made by officials of the Lagos State Environmental Protection Agency (LASEPA) National Agency for Food and Drug Administration and Control (NAFDAC) after a similar location was busted penultimate week by LASEPA.

This is apart from the estimate that Nigeria generates more than 32 million tons of solid waste every year, out of which only 20 to 30 per cent is collected as recently disclosed by the Director-General, National Environmental Standard and Regulations Enforcement Agency (NESREA), Aliyu Jarau.

After the scrapyard at Ikorodu was uncovered, a follow-up inspection was carried out at the facility on Friday by state and federal officials who found more poisonous substances and arrested four persons for allegedly tampering with evidence.

According to LASEPA’s Public Affairs Officer, Bola Ajao, “the joint team, promptly halted all activities on the site by placing a LASEPA stop-work order, leading to the arrest of four allegedly involved persons during the joint follow-up inspection exercise, two of whom were previously stationed security men of the yard”.

The men attempted to destroy previously established evidence by gaining access to the sealed site illegally (over the fence) and attempting to destroy evidence by arson. The Facility Manager, FC Afara, and Alh. Kolawole Hamzat, the alleged owner of the expired drugs (paracetamol, ginseng multivitamin cleansers) were taken to custody by NAFDAC for further questioning.

These discoveries were rife, as the government officials combed through the facility and found large quantities of artificial sweeteners and flavours, biohazardous waste including used needles, syringes, nose masks disposable hand gloves and apparel amidst the squalor.

While reacting to the incident, Fasawe, who is the General Manager of LASEPA, described the exercise as a purposeful collaboration between sister agencies and commended the investigative team for exhibiting a high level of professionalism in the management of the case.

She said, “The two agencies involved are both saddled with the responsibilities of safeguarding public health and promoting quality of life in a sustainable environment.

“These activities affect all of us, we all breathe the same air, drink the same water, and eat food from the same soil.”

Fasawe lamented that “it is indeed disheartening to note that the Lagos State residents, the security men in question, scaled the fence of a government sealed property and set on fire to the evidence unmindful or unaware of the potential and profound environmental effects such a release to air, land and water from such a fire would lead to or the potential for a large fire outbreak and resultant loss of life and property.”

She pointed out that “any such operation stopped reduces the State’s mortality toll of 11,200 annually attributable to poor air and environmental quality”.

While providing detail on the cost of these illegal activities to the government, Fasawe advocated self-regulation and self-compliance as the long-term solution, urging residents of Lagos State to report any activities they feel are not environmentally friendly.

“However, the State would be swift and decisive in safeguarding and upholding the rights of all Lagosians over and above perceived economic gain,” she said.

The LASEPA boss sounded a stern warning to other illegal operations in and around the residential area, revealing that visual inspection shows that houses 1 through 8 on Salvation Avenue at Idera, Owode-Onirin currently accommodates a church, office blocks, workshops, scrapyards and unapproved container depot.

According to her, “they need to relocate to areas earmarked for industrial and commercial activities within the State and we are willing to help facilitate the process with fair notice and with due consideration for the economic requirements.

“Breaking into sealed properties or removing government seals or tampering with evidence are all criminal acts that attract punishment, therefore, the full wrath of the law shall be served accordingly on the trespassers.”