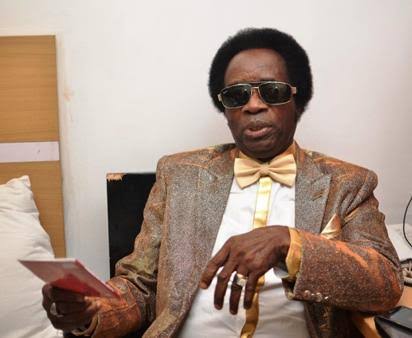 Details have emerged about how legendary singer and guitarist, Sir Victor Uwaifo allegedly died from complications from coronavirus (COVID-19).

The death of the music maestro and ‘Guitar Boy’ crooner, who celebrated his 80th birthday in March, was announced by the family at the weekend.

A family source who spoke to our correspondent on the condition of anonymity claimed that the late Uwaifo died of ‘COVID-19 induced pneumonia’.

The source said the late music legend died at the Stella Obasanjo Hospital in Benin City, the Edo State capital.

According to him, “This is indeed a sad period for the entire Uwaifo family as we are still in shock over his death. He was strong, hale and hearty; fell ill briefly and was hospitalized at a private health facility before he was rushed to the Stella Obasanjo Hospital at the weekend, where he died as a result of COVID-19-induced pneumonia.”

The source said that he was unvaccinated, noting: “We had tried convincing him on being vaccinated but he was undecided about it as a result of some conspiracies surrounding the vaccines, which are of course, false. It’s unfortunate that we still lost him to this deadly virus.”

Recall that the late singer’s nephew, Peter de Rock, had denied claims he died from COVID-19.

Peter had disclosed that the veteran musician died of a chest infection that affected his lungs.

The gospel musician added that the guitarist had to be supported with oxygen until he died.

He said: “Sir Victor Uwaifo died of chest infection which affected his lungs, thereby leading to difficulties in breathing.

“That’s why he was supported with oxygen.”

Born March 1, 1941, Uwaifo who hails from Benin City in Edo State is known for his prowess in handling musical instruments such as guitar, flute, and saxophone.

The celebrated musician was also awarded the National Merit Honours of Member of the Order of the Niger (MON) in 1983 for his contributions to the entertainment industry.

The music legend will also be remembered as the first Honorable Commissioner for Arts, Culture, and Tourism in Nigeria.