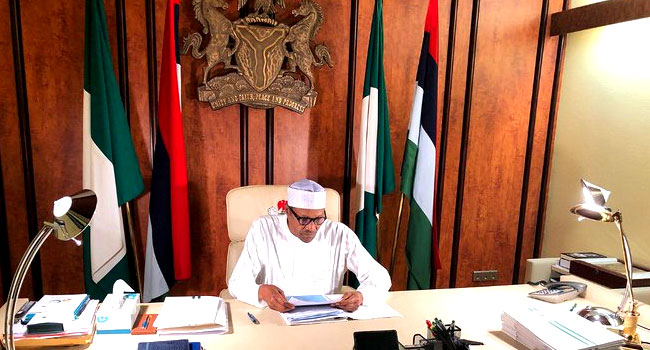 The Presidency has claimed that the recent attack on the Nigerian Defence Academy (NDA) might be a ploy by bandit terrorists to embarrass President Muhammadu Buhari.

Naija News recalls that terrorists had on Tuesday attacked the NDA in Afaka, Kaduna State, killing to military officer and abducting an Army major.

It was gathered that the bandit later demanded for 200 million naira to release the officer by military authorities have refused to negotiate with the terrorists.

Speaking to Channels TV on Wednesday night, Buhari’s spokesperson, Garba Shehu stated that the military will investigate and disclose what truly happened.

He however alleged that the attack by bandits, who have not openly pledged any political allegiance, might be politically-motivated.

Garba Shehu said those behind the attack want to embarrass Buhari’s administration, amid the “major successes” achieved by the military in the fight against insurgency and banditry.

“The president has denounced it. He is not happy about it. It is now left for the military authorities to thoroughly investigate this and bring out what happened,” he said.

“So many scenarios are being painted though. Could this be truly a criminal attempt to violate the sanctity of that military institution? Was this an opportunistic crime? Is it political? Does somebody want to embarrass the government by doing this?

“We are coming from major successes. Look at how Boko Haram is unravelling in the north; they surrendered. All of the victories that have been recorded even in the north-west — these bandits are being taken out in large numbers.