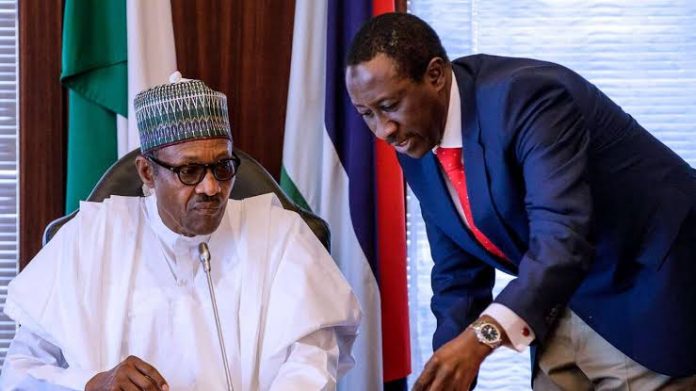 Reacting to the brazen attack on the Nigerian Defence Academy (NDA) in Afaka, Kaduna State on Tuesday, the group said Monguno and the service chiefs should be held responsible for the attack.

In a statement on Wednesday by its National Coordinator, Engr. Zana Goni, the Northern elders advised the President to immediately sack Monguno for incompetence.

The group berated President Buhari for refusing to sack Monguno as the security adviser when he replaced the service chiefs some months ago.

It stated that the attack on the NDA was a result of the failure of the country’s intelligence network, demanding a quick review of the nation’s security architecture.

According to the group, the fact that a fortified military institution could be so easily invaded by terrorists without resistance shows that no part of this country or anyone is safe.

The elders, however, blamed stakeholders in the Northern region over their long silence “in the face of unbearable criminal acts by armed herdsmen and insecurity across the country”.

The statement reads: “We woke up to the sad news of the attack on the NDA, leaving two officers killed and another abducted by bandits with heavy hearts. If it was not for the confirmation of this unbelievable action by the Academy’s spokesperson, Bashir Jajira, we would have still been in doubt.

“The fact that a fortified military institution could be so easily invaded by armed militias without resistance has left us with the conclusion that no part of this country and no citizen, no matter his or her status is safe again.

“Without mincing words, we wish to attribute this ugly development to intelligence failure and gaps in the capacity of our armed forces. We wish to strongly say here that the attack is a slap on the Nigerian intelligence community and the armed forces.

“The retention of the National Security Adviser, General Babagana Monguno at the time the president listened to the voice of reason and replaced service chiefs, may be contributing to the continuously deteriorating security situation in the country.

“Given the situation, we wish to humbly and respectively appeal to our dear President, Muhammadu Buhari, to as a matter of urgent national importance, replace the NSA, whose tenure since his assumption of office, has been characterised by heightened Boko Haram activities, banditry, kidnap for ransom and other heinous crimes without end in sight.

We reinstate unequivocally that Monguno has failed to provide useful advice to address the scourging insecurity in the country and therefore, does not deserve a continuous stay in office.

“As Northern elders, we have found it very important to call on President Buhari to remove the National Security Adviser, Major-General Babagana Monguno (retd), whose office and responsibilities are critical to the achievement of comprehensive security all over the country but hasn’t used the high esteem of his office in any productive ways since his appointment as NSA.

‘The reason for this call is not farfetched. We believe that Major-Gen Monguno was part of the gross failure associated with the tenure of the former security chiefs and his continued presence in office will make the success Buhari intended to achieve with the changes very difficult, if not completely impossible.

‘It is important that the NSA be replaced and the security architecture of the nation reviewed so that the process of injecting fresh blood can be completed.

‘We believe that the service chiefs need a clean slate to succeed as to avoid being tied to the springs of the past fatal failures. This call is both patriotic and totally apolitical as expected from a responsible group of elders in our dear region.

‘”It would be to the highest interests of Nigeria for the president to heed this call and act on it immediately.”