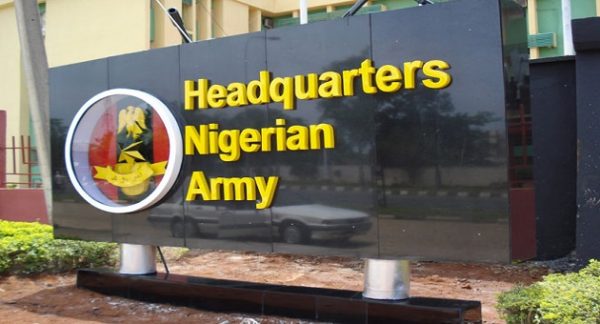 Major General Ibrahim Ali will not be removed as the General Officer Commanding 3rd Armoured Division, the Nigerian Army has confirmed.

The decision overrules the request made by the Plateau State Chairman of the TEKAN/ECWA Bloc of the Christian Association of Nigeria, Rev Moses Ebuga during a press conference on Monday.

Ebuga had alleged that Ali who also doubles as the Commander of Operation Safe Haven (OPSH) has failed in his responsibilities and is unable to stop terrorists from killing innocent citizens and residents of the community.

He said gunmen and terrorists have continued to unleash mayhem on residents under the watch of Ali, hence the call for his replacement.

However, the Army has absolved Ali of failing in his responsibilities.

The Army in a statement signed by the Acting Deputy Director, Army Public Relations Officer, Major Eli Lazarus, said those pushing for Ali’s removal are not sincere.

The statement added that sentiments are not considered when deploying personnel of the Army but such people are deployed only based on “competence, training, experience and capabilities.”

“We are not unmindful of the determination of some merchants of crisis to perpetuate unrest in Jos metropolis and its environs. They are also bent on ensuring that the GOC and Commander OPSH does not continue with his mandate of ensuring sustainable peace in the state.

“The call for the removal of the GOC did not come to us as a surprise as the campaign of calumny against the person of the GOC started shortly after his assumption of command. Those series of attacks were indeed precursors to this latest call for his removal.

While acknowledging that there have been challenges in dealing with insecurity in the area, the Army statement said more personnel and equipment have been deployed to the area.

It, therefore, assured residents of their safety and urged them to corporate with security agencies.

“While acknowledging some setbacks recorded initially, those challenges have been surmounted by more deployments, robust mobile patrols and increased presence of security personnel.

“We have also increased our engagements with critical stakeholders and citizens to build confidence and keep the channels of communication open. It is a fact that we have increasingly responded swiftly to distress calls to curtail crime and criminality in the state.

“To allege that Maj Gen IS Ali has not lived to expectation in managing the dual responsibility of GOC and Commander Operation SAFE HAVEN is false. Suffice to say that Plateau State is one of the 5 states under the 3 Division area of responsibility and they have been well managed. Moreso, military officers are deployed for appointments based on their competence, training, experience and capabilities.

“Additionally, the GOC is under oath to discharge his duties professionally and not to please individuals for their personal gains. The erroneous mention of the GOC’s initials as MS Ali is also indicative of the fact that the group does not even know the person of the GOC and Commander Operation SAFE HAVEN.

“At this point we urge the TEKAN/ECWA bloc of CAN to encourage her members to cooperate with the security agencies as they strive to restore peace and security in the state and not to resort to self help by taking the laws into their hands.

“The public is once again assured that security agencies would continue to carry out its assigned duties professionally devoid of tribal, ethnic, socio-political and religious sentiments by ensuring peace and tranquility in its area of responsibility,” the statement noted.