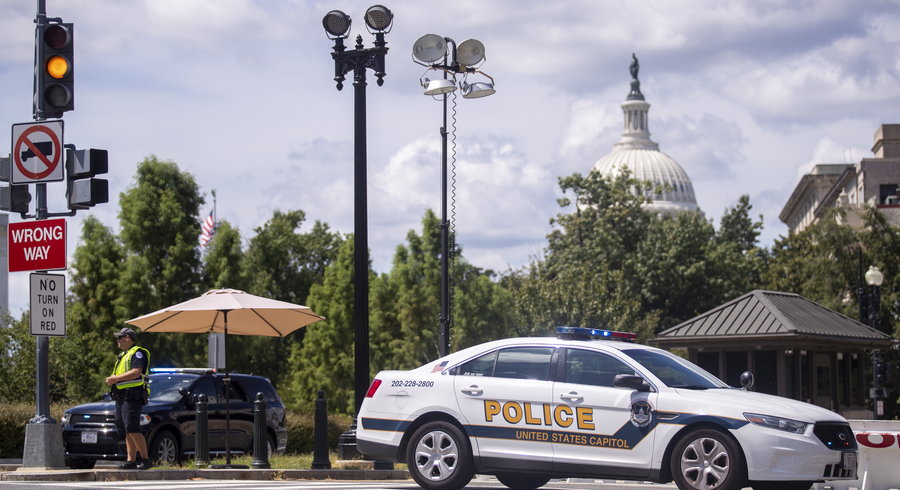 Police set up a security perimeter near the Library of Congress in Washington, Thursday, August 19, 2021.

An man who threatened to detonate a bomb near the Capitol in Washington surrendered on Thursday, after hours of tense negotiations in the city still scarred by the memory of the violent assault carried out on January 6 by pro-Trump protesters. The 49-year-old suspect was identified as Floyd Ray Roseberry by police.

This white man with a shaved head and a goatee had filmed live in the morning on a Facebook account in the name of Ray Roseberry, making incoherent threats.

The suspect “got out of his vehicle and surrendered” without resisting, announced Capitol Police chief Thomas Manger in the early afternoon. He was placed “in detention without incident,” said Thomas Manger, indicating that he did not yet know if any explosives were in the vehicle. “The on-scene investigation is still ongoing” and it will take “hours” to ensure the perimeter is secure.

Member of the pro-Trump movement

At this stage, investigators do not have any information indicating that the suspect had accomplices, the police officer said at a press conference. “I believe his mother had recently passed away, and we spoke with members of his family, he was struggling with other issues,” Thomas Manger revealed.

In footage from NBC, the suspect can be seen exiting his vehicle, raising his arms while kneeling and then crawling towards the police.

His social media posts “suggest he’s part of the pro-Trump, MAGA movement,” an acronym for “Make America Great Again”, former President Trump’s slogan. Facebook has since made its profile unavailable and is conducting some investigations on his profile.

“I’m trying to get Joe Biden on the phone. I’m parked up here on the sidewalk right beside all this pretty stuff,” said the suspect in a video  where he sometimes turns his lens towards the Capitol, on the other side of a park. “I’m not hurting nobody Joe. I’m not pulling the trigger on this thing. I can’t,” he said. “I’m telling you, them snipers come in, they start shooting this window out, this bomb’s going off.” he said, referring to the snipers deployed on the scene.

The individual also suggested that four other bombs had been placed elsewhere, in other cars. And he was attacking Joe Biden’s Democratic Party, which has a majority in Congress. “You all know what you’re doing, Democrats? You’re killing America.”