The micro-blogging platform, Twitter seems not done in its clampdown on users with provocative statements and threats against certain people.

The platform which activities has been suspended by the Federal Government of Nigeria has deleted the tweet of Simon Ekpa, a self-acclaimed disciple of the leader of the Indigenous People of Biafra, Nnamdi Kanu.

Recall that this is not the first time the platform would be deleting a tweet, as it deleted a tweet by President Muhammadu Buhari, whom many claimed led to the suspension of the platform in the country.

The platform had deleted the President’s tweet wherein he spoke about the civil war experience.

Buhari in a tweet had threatened to deal with those bent on destroying Nigeria through insurrection.

Ekpa in a statement on Wednesday had threatened a chieftain of the All Progressive Congress in Lagos State, Joe Igbokwe, to get ready to die.

“Joe Igbokwe get ready to die because Mazi Nnamdi Kanu will finally see the light at the end of the tunnel.”

“Tongue is powerful, his friends and families should take note and don’t accuse innocent people when nature takes its stand. He should’ve done spiritual consultation first.”

Igbokwe on various occasions had spoken against the approach of Kanu and IPOB.

The micro-blogging platform, however, deleted the tweet for violating its rules. 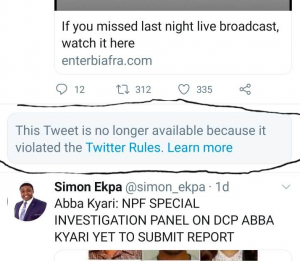