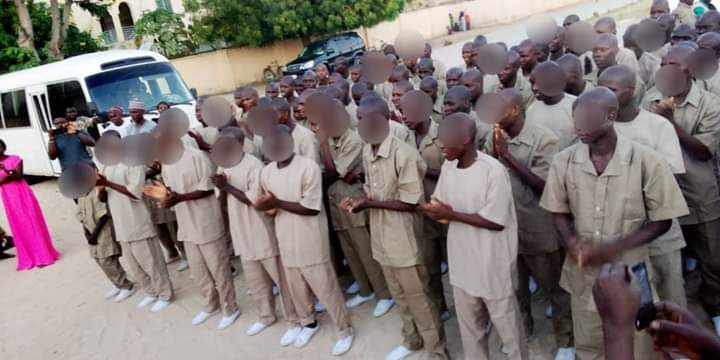 Borno State residents have been admonished to receive with love back in their communities, Boko Haram insurgents and ISWAP fighters who have just repented.

The people who have witnessed sleepless nights due to incessant attacks, killings, and destruction and properties by the terrorist groups, were asked to manifest a spirit of accommodation and integration of remorseful insurgents and fighters.

Naija News understands that the call was made by the Muslim Rights Concern, MURIC.

Earlier on Wednesday, Borno State Governor, Babagana Umara Zulum, appealed to both the Federal Government and the Nigerian Army to use every resource available to them in assisting the state government towards resettling and reintegrating Boko Haram insurgents and ISWAP fighters who are surrendering.

Zulum who has been restless, spending most of the day with troops at the war front and most of the time in the dark hour around the state to ensure that all sectors are working and peace is assured, believed the repentant insurgents if trained and provided with basic needs, will turn a new leaf in the society.

MURIC in a statement made available to newsmen by its director, Professor Ishaq Akintola, on Thursday, backed Governor Zulum’s call, urging residents of the state and the Nigerian Army to treat the returning fighters like brothers newly found.

The statement reads: “Nigeria’s North-East war zone has witnessed a dramatic change with Boko Haram insurgents and ISWAP fighters laying down their arms in their thousands. Consequently, the zone has been inundated with an unusually large number of ex-insurgents and former ISWAP fighters.

“This has created a humanitarian responsibility for the state government. Consequently, the state governor, Professor Babagana Umara Zulum, yesterday appealed to both the Federal Government (FG) and the Nigerian Army to assist the state in resettling the surrendering fighters.

“MURIC joins the hardworking Governor Zulum in appealing to both FG and the Nigerian Army to do everything possible in assisting the state government in resettling and reintegrating. A governor who spends most of the day with troops at the war front and most of the night walking around the city, visiting hospitals and teaching in classrooms to ensure that all sectors are working needs to be supported.

“We emphasize the fact that peace-making is cheaper than fighting wars while meaningful development and growth can only occur in a peaceful environment. FG should therefore go all out in ensuring that its deradicalizing process is accompanied by stomach infrastructure and economic resettlement.

“Boko Haram insurgents and ISWAP fighters who are surrendering should be resettled and trained invocations that can enable them to cater for themselves and their families in future. Quick and meaningful resettlement will encourage the remaining insurgents and fighters to embrace peace.

“MURIC also appeals to the civilian population in Borno to manifest a spirit of accommodation and integration of remorseful insurgents and fighters. We warn against stigmatization of any sort. Returning fighters should be treated like brothers newly found. What they need is our understanding, cooperation and kindness.

“As we round off, we remind both FG and the Nigerian Army that it is more important to win the war than to win the battle. Battles are won in trenches, but the war can only be won in the minds of men. Only a swift, effective and meaningful resettlement of remorseful Boko Haram insurgents and ISWAP fighters can win the real war.”