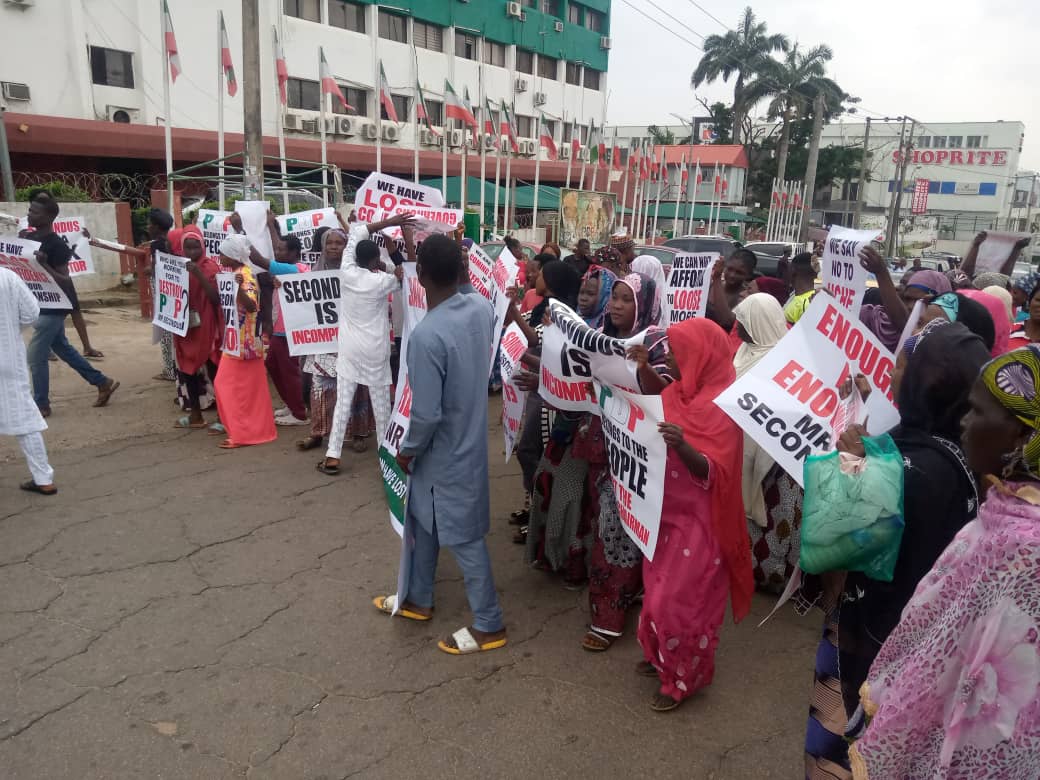 Youths of the Peoples Democratic Party, on Tuesday, continued their ‘Uche Secondus Must Go’ protest in Abuja despite an appeal for calm by the PDP Governors’ Forum and the party’s Board of Trustees.

The youths protested at the national Secretariat of the party (Wadata House) in Wuse Zone 5 area of the nation’s capital.

They are protesting against alleged mismanagement of funds and below par performance of the Party’s national chairman, Prince Uche Secondus.

The placard-carrying protesters chanted “Secondus cannot be bigger than the party” as they demonstrated in the precincts of the PDP secretariat to press home their demand for his immediate resignation.

On Friday, PDP governors and the BoT members had appealed to party members, who are agitating for the removal of the national chairman, to be patient with the NWC, assuring them that their concerns would be addressed.
However, protestors continue to gather peacefully in Abuja in continuation of their agitation.
In his public address, the leader of the group, Comrade Tamunotonye Inioribo, said: “We have nothing against Prince Uche Secondus. I am from Rivers State, Secondus is from Rivers too. I am an Ijaw, he is also an Ijaw. But, this is about the party.

“Our Deputy National Chairman in 2013 (Secondus) asked the then, Alhaji Bamanga Tukur, to resign, because of issues similar to what we are facing today in the party.

“We are simply saying that we need a new direction in the party. So, Secondus must go.”

“Wike is not part of the support for the protest. Patriotic PDP youths came together,  putting our resources together also to say ‘Enough is Enough’

“APC has failed. Nigerians look up to the PDP but the PDP must not disappoint Nigerians. We must fix PDP to fix Nigeria. So, Secondus must go.”