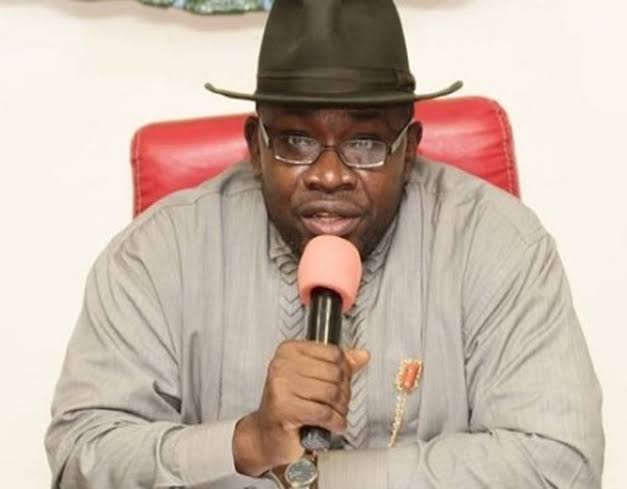 Senator Seriake Dickson has disagreed with the those calling for the immediate removal of Prince Uche Secondus as the National Chairman of the Peoples Democratic Party, PDP.

Naija News had earlier reported that some youths in the party, under the aegis of the Save PDP Group, had thrown their weight behind some chieftains calling for Secondus’ resignation or sacking.

The calls followed the unearthing of alleged corruption and mismanagement of N10bn party funds by the Secondus-led National Working Committee.

Addressing the recent crisis trailing the maneuvers for the PDP national chairman’s removal, Dickson in a statement on Monday in Abuja, said the controversies were about nothing but the 2023 presidential ticket.

So, the ex-Bayelsa governor urged Secondus  to utilize his options and powers under the PDP constitution to ensure that no officer or member of the party, no matter how highly placed, either usurps or impedes the exercise of his rights, powers and duties as national chairman of the Party.

He said, “My attention has been drawn to a purported statement by some members of the National Working Committee who went outside the constitution of the party and convened a meeting in a hotel room without the knowledge, consent and presence of the chairman.

“I want to draw the attention of PDP leaders, members and Nigerians at large that the meeting was the action of a few party officers and does not represent a valid resolution or decision of the National Working Committee known to the PDP constitution.

“By the PDP constitution, only the national chairman of the party can summon and preside over meetings of the organs of the party especially the NWC of which he is chairman. So the purported meeting and the outcome therefore are part of the plot to contrive a needless crisis in the PDP.

“It is part of the scheme to call a dog a bad name to hang it.  The general public should note that the statement signed by some members:  3 members of the working committee and 3 Vice chairmen of the party (as indicated in the press release) does not constitute a valid resolution of the National Working Committee.

“By the way, the NWC has 19 members and only 6 of them signed the statement leaving out the majority of 13 who were not at the meeting and the chairman who was not aware, who did not attend, who did not authorize and who did not preside over the said meeting and therefore it is not only a nullity but an act of gross misconduct.

“It is all an effort to contrive a crises in the party to further the ulterior objective of those who are funding it, the intent of which is to cause a major crisis in the PDP.

“Secondly, my attention was also drawn to a purported statement by the Reps Caucus. As Nigerians and all PDP leaders know, the minority leader of the Reps is Honorable Ndudi Elumelu not Hon Kingsley Chinda, and members of the House of Representatives caucus have already spoken that they did not hold any such meeting and the Chairman of the caucus Hon Ndudi Elumelu has rightly issued a statement which is in the public domain that he did not summon or preside over such a meeting.

“Therefore, Nigerians should disregard the reported decision of the purported rep caucus meeting.

“All this is to create a media frenzy backed up by the sponsored demonstrations at the party secretariat on Monday which are designed to force the chairman to resign in order to set up a caretaker committee which is illegal. Happily the National Chairman, Prince Uche Secondus has issued a statement a short while ago that he will not resign. I support this decision fully as it is backed by the PDP constitution.

“Let me also bring to the attention of all that by the PDP constitution, a vote of no confidence even by a duly constituted NWC or other organs of the party does not remove a Chairman. The chairman is voted for and can only be removed by the National Convention unless on his own volition, he chooses to resign. So I call on all leaders of the party that this is perhaps their last effort to save the PDP. Like me, most of us have paid dearly and have paid our dues since 2015 when we lost the Presidential elections and like me, we should all not rest on our oars or leave any stone unturned in the bid to strengthen and reposition the party including calling people to order and standing up against illegality when we have to.

“There is no crisis in the party. What is happening is only a contrived media crisis orchestrated and funded by some people with a motive to hijack the party without subjecting themselves and their cronies to a democratic vote at the convention which is due in less than 4 months.

“This has nothing to do with Secondus performance but a coup against a major democratic institution in Nigeria and must be resisted and stopped by all lovers of democracy and all men of good conscience in Nigeria.

“The decamping of Governors and other leaders is not the fault of Secondus. It happens from time to time in all political parties from 1999 till date. The PDP has received Governors, presiding officers of the National Assembly and other political leaders under secondus and will continue to do so after this crisis. It is these people orchestrating these crisis that have made governors and other leaders to leave the party because of the needless crisis and the toxic political atmospherecreated by them within the party.

“Since we lost the 2015 elections, secondus has labored to keep the party in spite of harassment, campaigned round to support candidates without the so called ‘taxation’ which has been put to an end in the party. He is one of the most experienced political party administrators in the party and in the country right from his days as NPN youth leader till date. He has seen it all and done it all. The whole issue is that Secondus insists that party decisions should be taken by all stakeholders and not by a few especially decisions about the direction of the party in 2023.

“I call on the National Chairman to utilize all options and powers available to him under the constitution and to take steps to ensure that no officer or member no matter how highly placed usurps, or impedes the exercise of his rights, powers and duties as national chairman or is allowed to plunge the party into another needless crisis.”

2023: ‘We Will Give Whatever It Takes To Send APC Packing In Niger State’ – PDP