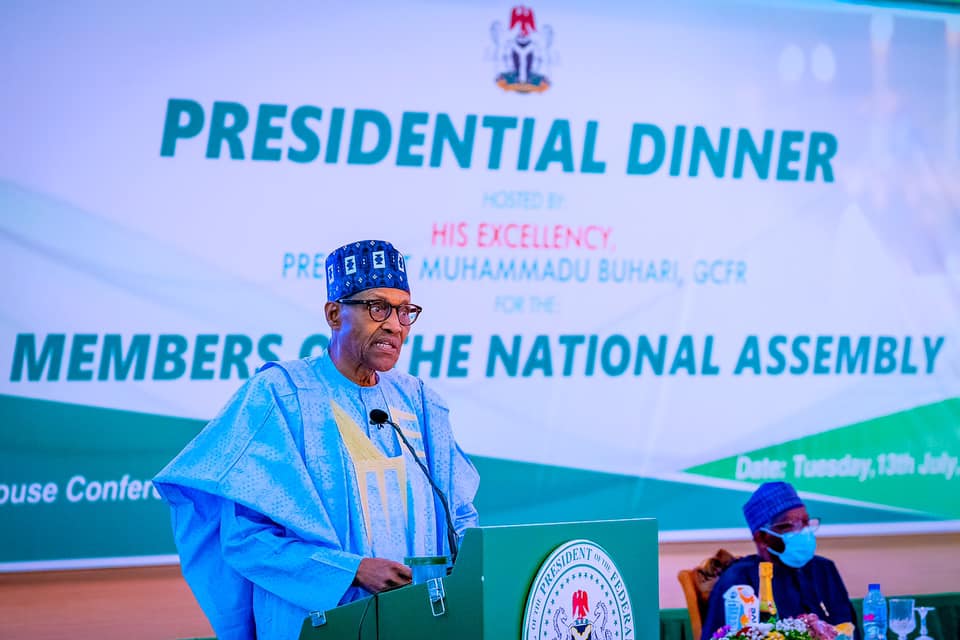 Six hundred and fifty-eight days from today, Nigeria will be free from Muhammadu Buhari and his government. To count down is to wait for something to happen.

You are counting down when you consciously take note of every day or moment as it passes until the end comes. In a democracy, you are allowed to start counting down for the incumbent. It is neither treasonous nor treasonable to look forward to the end of an era, unpleasant, pleasant – especially unpleasant.

Buhari’s end-of-reign countdown started the day he became our president. I don’t think he knows his time will ever end – if he does, his gait, comportment and work ethic have not shown it.

I am assuming that today is August 9, 2021 and that the incumbent would leave us alone on May 29, 2023. So, if my assumption is correct, the next question should be who or what succeeds the present? Some northern youths have weighed in on this – the north loves power.

They issued a statement on Friday and said that they won’t accept another old, weak and sick president in 2023. It was their positive reaction to IBB’s recommendation of a cut-off age for the next president. General Ibrahim Babangida had earlier said in a TV interview on Friday in preparation for his own 80th birthday, that the next Villa person should be in his 60s, not 70 and above.

Mercurial IBB does not want another old, creaky president for our country after the current bated breath. But 60-69 years is the age bracket that appeals to our once-upon-a-time military president.

I am surprised that IBB did not remember that Barack Obama was 47 years 169 days old when he became president of the United States. Obama turned 60 last week, almost five years after his retirement from the White House.

If he were a Nigerian, he would just be maturing for consideration as a candidate for our presidency – or even as an adviser. There are current examples that should have caught the General’s attention. Canadian prime minister, Justin Trudeau is 49 years old.

He was born on December 25, 1971. Prime Minister Boris Johnson of Britain is 57 years. He was born on 19 June, 1964. President Emmanuel Macron of France is 43. He was born on 21 December, 1977. They are all doing well as leaders of their first world people but they are all not qualified yet to be president of Nigeria.

I know that the argument is right there before me that age is just a number, that Obama was truly 47 when he moved into the White House thirteen years ago but in the same country, Joe Biden, 78, is the sitting president.

I would have said that Mark Twain, author of The Prince and the Pauper, believed as much because some commentators credited him with saying that “age is an issue of mind over matter” but Twain was the same person who told his readers that “seventy is old enough. After that, there is too much risk.”

So, I say too that age becomes an issue in leadership when the aged leader’s inner being and his ideas get wrinkled by the length of his years. That is what we suffer in Nigeria and it is the reason the country is dying, the reason it is irritable, suffers violent heartbeat and has breathing difficulties.

We are talking elections again even while many of our existential questions remain unanswered.  How much help is the terrorized going to get from the next man – whether young or old? Euripides, in Orestes, said “when one with honeyed words but evil mind persuades the mob, great woes befall the state.”

Every wounded Nigerian would relate quickly with those wise words. The last leadership recruitment exercise was a mob action. Yet, we are debating how to give a renewal licence to the bosses and their mobsters to further mess with our lives. But as Abraham Lincoln said, “elections belong to the people. It is their decision.

If they decide to turn their back on the fire and burn their behinds, then they will just have to sit on their blisters.” We are sitting on the blains from the last polls. They remain sorely painful.

That is why many down south sound tired of looking at 2023 and its elections. They are insisting on a redefinition of the association called Nigeria. The heat is on. But for those looking forward to 2023 and the election of Buhari’s successor, General Babangida added other conditions.

He said the next president must be literate in economics; must be nationalistic, cosmopolitan in outlook, and pan-Nigerian in words and in action.

Nice ideas; no employer would squirm at the prospect of such a spic-and-span candidate getting the job. But, Nigeria does not make its choices using the criteria of excellence. It was not created for such lofty heights.

“I’ve never fooled anyone. I’ve let people fool themselves. They didn’t bother to find out who and what I was. Instead they would invent a character for me. I wouldn’t argue with them. They were obviously loving somebody I wasn’t.”

Hugely successful American actress, model and singer, Marilyn Monroe (born June 1, 1926) has continued to rule the world of American pop culture even after her death on 4 August, 1962. She has many legacies – including quotable quotes that keep her memory green forever.

The above is one of them and it speaks directly to the Nigerian people and the choices they make – and how they make them.  Every word Monroe used in that quote could as well belong to Nigerian leaders at all levels. Three years ago, I asked on this podium why it was difficult – even impossible – for us to get the best for ourselves as leaders.

The cliche is there that the best should rule the rest. That is a cardinal order even in the animal world. But Nigeria is sold to mediocrity. It is not as if we do not know the difference between what is mediocre and what is excellent.

We draw the line regularly at the personal level. We do due diligence on every ‘unknown’ person seeking the hand of our child in marriage. Without being told, everyone carefully chooses their cooks, their drivers, the doctors who treat them.

No one takes bribes to subvert those personal decisions for oneself. We carefully choose the mechanics who fix our old and new cars with our eyes and every other sense very well open. We don’t accept counterfeit currencies nor do we knowingly inject expired drugs. But we crown counterfeit persons as our kings and exhume the past to rule our present and dictate our future. And we say we want to be well!

We are not even sure there will be a country after this era. A national newspaper reported on Sunday that in 38 days, bandits murdered about 50 police officers and 211 other Nigerians.

The kidnapping industry, the report said, netted 321 victims with a demand of N1.415 billion made of them. And the madness continues all over the country. With heavy heart, every person, except the derelict doctors by the bedside, mourns our dying nation.

The end signs bloom with the endgame. Doctors say when someone is dying, they lose control of their breathing. They suffer irregular heartbeat, their blood circulation slows down; their brain and vital organs decelerate as they receive less oxygen than they need.

These are horrifying signs of the end and victims of Nigeria are witnesses to these symptoms. But the doctor is not bothered – because he is sick too in body and spirit. When the head is not well, the entire being suffers. What do you call hospitals without doctors?

We have that in Nigeria presently. Our doctors are on strike but the Nigerian president, old, sneaky (and sick?), is abroad consulting his reliable doctors. It makes no difference that the president is home or he is abroad. When he was in Nigeria, school kids were not safe; they suffered abduction in hundreds.

In his absence, they remain unmourned in captivity. In Borno, soldiers now escort primary school pupils to school. The video is trending. I saw very determined fires in the eyes of those defiant kids and in their bold steps. They want education. Nigeria appears to want something else; it talks about the next election – although it needs air, it is gasping.

General Martin Luther Agwai retired as our Chief of the Defence Staff in May 2007. He was the Chief of the Army Staff from 2001 to 2003. On Sunday, he gave the Vanguard newspaper a clinical analysis of the insecurity that is eating the heart and liver of Nigeria.

What is the cause of the problem and will it ever end? His verdict sounded almost like what a cancer patient gets from his doctors. Terminal. Agwai said that in today’s Nigeria, “there are no economic activities taking place anywhere. Nobody knows what is happening.

Everybody is creating illegal administrations in their area and, once that is not checked, you find out that a little success by them will open more space. That is where we found ourselves today.” In other words, the country is on a free-fall – the rock below will win the war.

Aristotle said every person that thinks himself wise should be able to deliberate well about the things that are good and advantageous to himself. But any sincere deliberation about Nigeria is treason.

Aristotle added that the wise should not find it impossible to identify “things conduce to health and to physical strength, and the things conduce to the good life in general.” Here, even when we identify those things that are needed to buoy our wellness, we stop and ask which soil grew them and what god they worship.

I pity Buhari; I do not pity him. How deep will the misery of the last man on earth be? How does it feel to be a city’s last ruler, the president of a former country? Nations die if they resist regeneration.

William Wordsworth says so in his Westminster Bridge where the lines of a city’s “splendor” and its “mighty heart” end in “lying still.” There is only one way to avert the looming crash of Nigeria’s vehicle as it is – give it a park-and-repair treatment.

But we are not prepared for that option. We are searching for another driver to continue maneuvering the brakeless vehicle to its nowhere. It may soon be over – and we should be worried. It is 94 weeks or 658 days to the end of Buhari’s own era as our president.

What happens between now and then – and after? Only time will tell if he will be succeeded by someone or by something.

If Not Infrastructure, Then What? By Femi Adesina

Kanu Is Technically Still In Kenya By Aloy Ejimakor