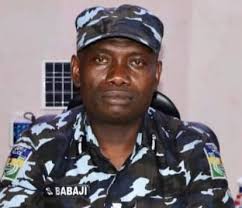 He took over from Bala Ciroma, who was promoted to the rank of Assistant Inspector General of Police (AIG), and deployed to Zone 7 Headquarters.

Naija News reports that this was contained in a statement by the FCT Police Public Relations Officer, ASP Maryam Yusuf, on Sunday in Abuja.

Recall that the Inspector General of Police (IG), Usman Alkali Baba, on Friday approved the deployment of newly promoted CPs to 12 states and the FCT.

Sunday was among the CPs deployed,  following their promotion from the rank of Deputy Commissioners of Police.

While speaking after his assumption of office at the Command’s headquarters in Abuja, the new Police boss noted that the Command had, over the years, made steady progress in crime fighting.

He pledged to consolidate on the legacies of his predecessor by strengthening the existing collaboration between the command and key stakeholders.

Sunday also warned that there will be no safety net for criminals in the nation’s capital.

The statement added, “The new CP was born on April 12, 1963, in Bambam, Balanga Local Government Area of Gombe State. He holds a Bachelor of Science Degree in Sociology from the Ahmadu Bello University, Zaria.

“He was enlisted into the Nigeria Police Force on March 3, 1990, as an Assistant Superintendent of Police and has served in different capacities, including Detective, Special Fraud Unit, Lagos, and Sectional Head at EFCC.