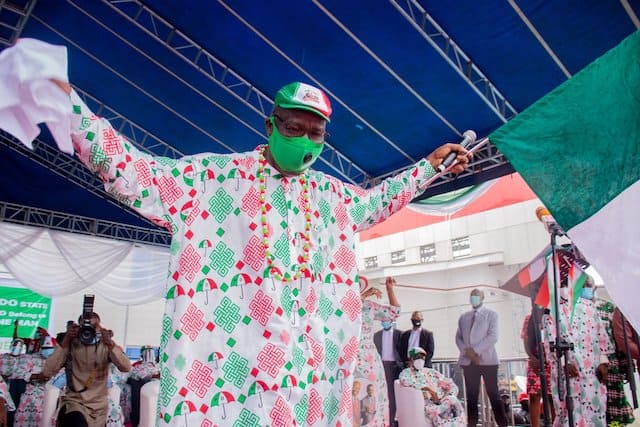 A former Commissioner of Information under the administration of Adams Oshiomhole in Edo State, Kassim Afegbua, has revealed why he worked against the re-election of Governor Godwin Obaseki.

Naija News reports that Afegbua had vowed not to support Obaseki during the 2020 gubernatorial election despite being in the same party with the governor.

Speaking in an interview with The Nation, Afegbua said he never regretted his decision to work against the Obaseki.

“In Edo state where I come from, Godwin Obaseki, the current governor, was part of the cabinet where we served under comrade Adams Oshiomhole. When he was brought forward as a gubernatorial candidate, I publicly objected that I was not going to support him in 2016. In 2020, he left the APC for Peoples Democratic Party (PDP) where I belong, and I said no, that the party imposed him on us. I openly campaigned against him. But others would pretend and hide and benefit from the largesse that he’s bringing, I said no,” he said.

“My own is that the morality of your coming is subject to questioning. Everyone knew I worked assiduously for the opposition party. For me, it’s about the state and not about individuals, and I believe very strongly that members have a role to play in keeping the philosophy and ideology of a political party. If there is an aspirant, and you brought someone because he’s a state governor with state funds to spend, I don’t think that’s the right thing to do. So I said no.

“I am consistent. I left the APC because of the same issue in the past. You said you were going to do restructuring, create jobs and all of that, but since you came on board, the country has collapsed right under your feet. So that means you deceived Nigerians.”