The Deputy Commissioner of Police, Abba Kyari has described people calling for his arrest and detention in the United States, over an alleged bribe he took from internet fraudster, Ramon Abbas, popularly known as Hushpuppi, as ‘bad belle Nigerians’.

Hushpuppi who pleaded guilty to the charges filed against him said he used Kyari to arrest a fellow fraudster Chibuzor Vincent following a dispute presumably over how to share the $1.1 million loot received from a Qatari businessperson.

Kyari, however, denied his involvement in the allegation levelled against him by the suspected internet fraudster.

The Deputy Commissioner of Police while reacting to one of the comments on his post on Facebook, charged those criticising him based on his response to produce the “papers calling for our arrest”.

He wrote in the post later deleted along with some other comments, “Hahahahaha indicted where, How? On social media abi. Let’s see the Evidence of the indictment or the Letter from the court looking for us. Many people who admire our clothes were connected to the designer, So this is an offense now? Or to arrest when their (sic) is a Complaint of threat to life is an offense?

“The bad belle people will wait forever to see us arrested or to produce the papers calling for our arrest. We will not be surprise (sic) if a Fake arrest warrant on us will start circulating later today.”

“If FBI wants to hear from somebody working with any Government, they will send letter to the Government of that Country. Am sure that letter too can be fabricated and circulated on social media soonest too. Best wishes for the people waiting to see us arrested, Hahahahaha.” 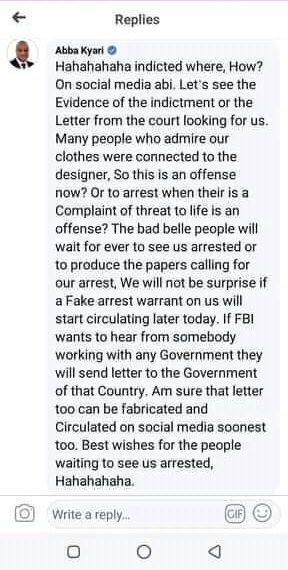