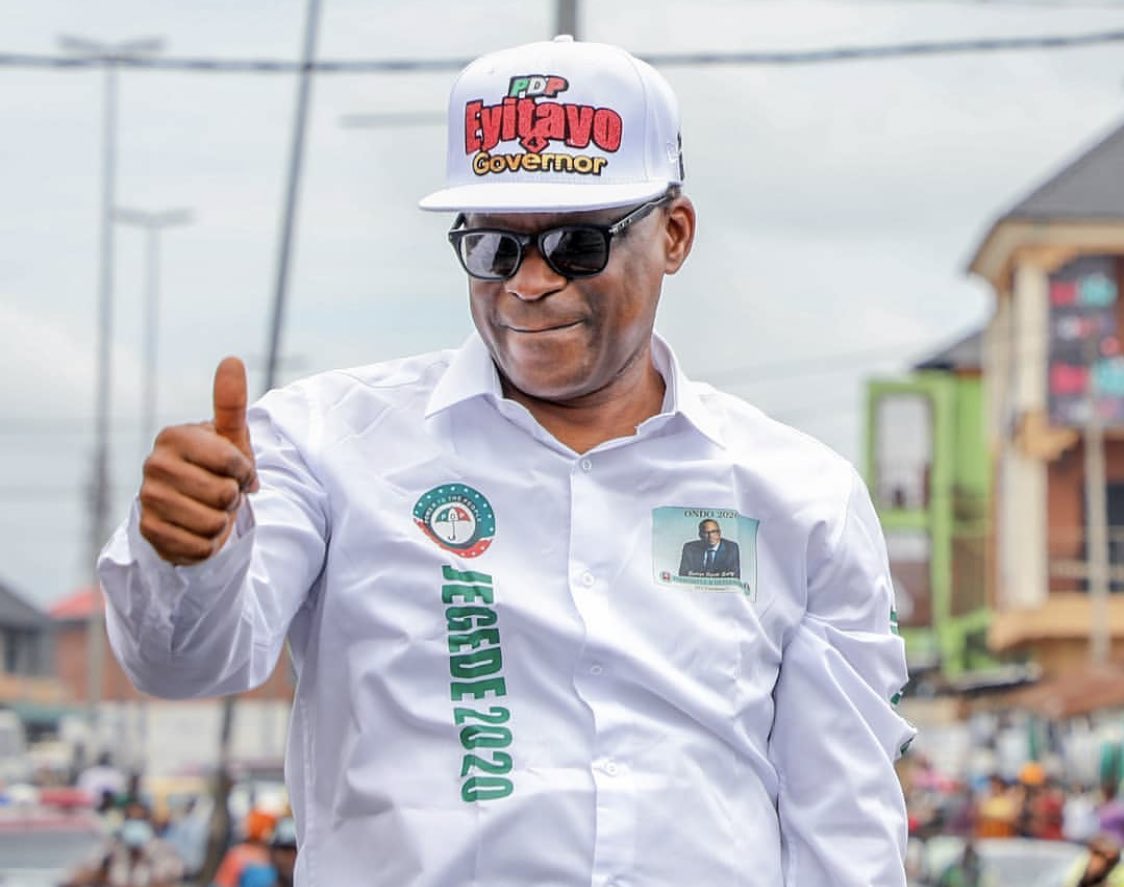 The candidate of the Peoples Democratic Party in the 2020 Ondo State governorship election, Eyitayo Jegede has congratulated his All Progressives Congress counterpart on his Supreme Court victory on Wednesday.

Jegede in a personally signed statement after the apex court threw out his case challenging Akeredolu’s election victory wished the affirmed Governor wisdom for good governance.

He also appreciated his supporters for standing by him until all constitutional means of challenging the 2020 governorship election results were exhausted.

He added that his respect for the judiciary and the Supreme Court has not diminished by the outcome of the case.

The statement said: “Now that we have explored the grievance procedure permitted by the constitution and the law, it is time to give glory to God.

“We thank specially our legal team, under the leadership of Dr Onyechi Ikpeazu for their commitment, industry and dedication to our cause. Over and above all, we thank them for their sacrifice.

“We are thankful to the people of Ondo State for their steadfastness, we were in this for service and for the collective interest of the majority of our people.

“The outcome of today’s judgement should not deter good and well-meaning individuals from aspiring for leadership in our State and in our Country. For all our people who have stood strong, we salute you.

“We thank the national and state leadership, and the generality of the members of PDP for providing us with great support. For our governors who provided the required leadership and kept faith with our aspiration, gratitude, history will judge you right.

“With this outcome, our respect and reverence for the judiciary and our justices of the supreme court has not diminished.

Also, the PDP in Ondo State said they were not discouraged by the verdict of the Supreme Court and vowed to continue to work for the people of the state.

The party in a statement by its State Publicity Secretary, Kennedy lkantu Peretei said all PDP supporters should be encouraged that they gave a good representation despite the final outcome.

The statement reads: “The Peoples Democratic Party (PDP), Ondo State Chapter and its Candidate in the October 2020 Governorship Election have accepted the verdict of the Supreme Court being the Apex Court in the land.

“In their considered opinions, all the Justices agreed that, Mai Mala Buni violated the 1999 Constitution of the Federal Republic of Nigeria (as Amended) but four of them in their majority decision dismissed our Appeal because Buni was not joined in the petition.

“Three other justices in their minority judgement held that joining Buni was unnecessary because the Constitution which is the ground norm of our democracy can not be trampled upon with such impunity.

“The implication of this verdict is that, the non-joinder of Buni is more fatal to the petition than the infringement on the Constitution.

“Our party wishes to encourage all our party supporters to remain steadfast and be consoled that, we fought a good fight, from the beginning to the end.

“The Supreme Court is the “Guardian Angel” of our Constitution and Democracy. To ensure that nobody tramples upon it without consequence.

“To this end, the Judgement will also go into history as one of the major tests of our democracy which ought to be guided by the rule of law.

Peretei added that “As much as we are not discouraged by this verdict, we shall continue to pursue that which will make life more easy for the people of Ondo State.