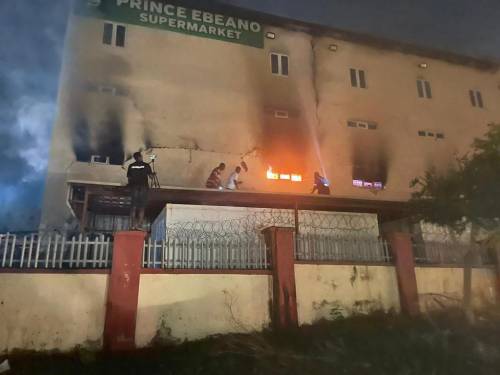 The fire incident at the Ebeano supermarket in Abuja and the viral video involving a minor has become a major concern for Nigerians.

In a viral video, the minor was seen setting fire on some items close to some highly flammable items.

The incident resulted in the massive inferno that firefighters struggled to put out.

Legal experts have taken out time to speak on the fate of the 9-year-old suspect if a lawsuit is filed against her.

A lawyer identified as Bakare Rasheed, while speaking with Daily Post said a minor cannot be tried in a regular court, but a juvenile court.

He said, “The girl can be subjected to trial (though not in regular court) only in designated court (juvenile court) for persons who have not attained the age of maturity.

“Trial of minors does not take place in public court but usually in place not meant for the public to witness the proceedings. Identities of such minor are usually protected.

“The idea of the police to have leaked the CCTV footage violate the girl’s right (even  though she is a suspect having perceived to have committed offences of mischief by fire or explosives as contained in Sections 336 and 337 of the Penal Code) The Penal Code is applicable in Abuja (the place where the alleged crime took place),” he said.

He explained that section 50 of the penal code “exonerates minors (who are 7 years below or minors above 7 years but below 12 years) from offences under the Penal Code if there is sufficient reason to believe that such a minor do not understand the nature and consequence of a crime.”

“Section 452 of Administration of Criminal Justice Act, 2015 provides to the effect that where a minor is a suspect (in about crime), the Child Rights Act 2003 shall be applicable.

“Section 204 and 205 of the Child Rights Act, 2003 regulates the form and manner at which child judicial processes should be conducted. A child investigation and trial shall at all times protect the privacy of such a child.

Another legal practitioner, Henry Kelechukwu, said the two adults that allegedly took the little girl to that supermarket could face trial for the crime.

Accord to him, the two adults could face charges of conspiracy, aiding and abetting and even the main crime.

“A child cannot be held liable for any criminal case, the law tries to protect the future of a child, putting into consideration the fact that the child may not have been aware or understand the facts, the consequences or the impact of his/her action.

“Even though they were not the one who went to light up the place, in my opinion, for them to have gone there— there is what we call accessory before the fact, ad accessory after the fact. What makes you a principal offender is participating in the main act itself, and by taking a person there and also being there to ensure the thing was done, it has changed you from being an aider, abetter to the main offender.

“If at the end of the day, through investigation and interrogation, that they indeed took her there with the intention to commit the act, then they would be held liable for the said arson.”

“The owner of the business can sue those two, you can sue them through a civil action. Although, if the court should make a judgement and they can’t pay, that is a bad judgement. Unless if they have properties that you can take,” he noted.