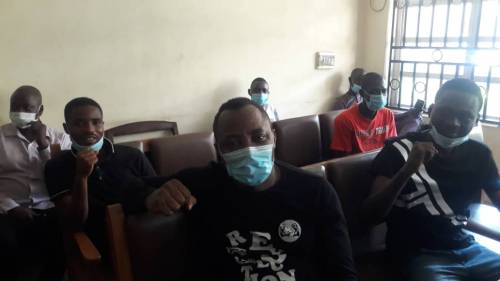 The Nigeria Police Force has released human rights activist and publisher of SaharaReporters, Omoyele Sowore, and others who were arrested during a protest at the Federal High Court, Abuja.

Naija News earlier reported that the activist and some anti-Buhari protesters were arrested for attending the court case of the leader of the Indigenous People of Biafra (IPOB), Nnamdi Kanu, at the Federal High Court, Abuja.

He had written on his Twitter page: “I have just been arrested by the Nigerian Police at the Federal High Court. Subjected to beatings by police officers and taken to the Federal Secretariat police station.”

However, few hours after their arrest, the former presidential candidate announced that he had been released alongside others.

He said, “They have just released us. They dragged, harassed and beat us. They took us to the Federal Secretariat Police Station. I told them that they have no right to arrest me.

“I have a right to observe the trial of Nnamdi Kanu. They took our cards and deleted all recordings.”

This news medium had earlier reported that security operatives denied lawyers, journalists and other court observers access to the courtroom on Monday.