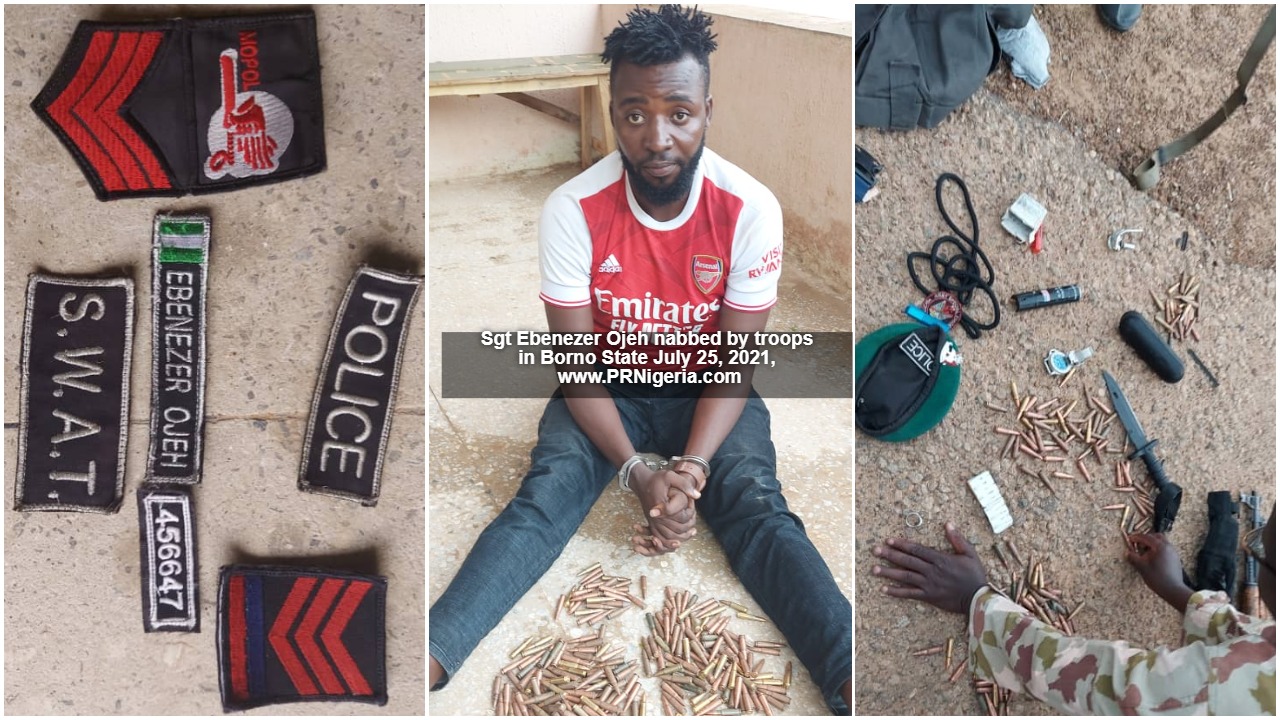 A suspect, Ebenezer Ojeh who claims to be a Police Sergeant has been arrested by troops in Borno State with a cache of dangerous weapons found in his possession.

It is understood that Ojeh was flagged for exhibiting suspicious behaviour when the commercial bus he boarded was stopped at a military checkpoint.

Troops of the 154 Task Force Battalion Ngamdu led by Acting Commander Major D.Y Chiwar intercepted the vehicle along Maiduguri- Damaturu road, and upon searching the suspect’s bag, loads of ammunition were discovered.

Though the suspect claimed to be a Police Sergeant serving with the Police Unit of Special Weapon Tactical Team (SWAT), from the Mobile Police Force 19-unit, Rivers State, he couldn’t explain the weapons discovered in his possession or his mission in Borno.

An intelligence officer who spoke with PRNigeria on the matter disclosed that “Ebenezer Ojeh was intercepted at a checkpoint due to his suspicious behaviour after he had boarded a Borno Express commercial going to Abuja.

“After searching his bags, about 220 quantity rounds of 7.62mm Special, 1× hand grenade, a dagger and other items were discovered.

“During interrogation by the troops, Ojeh claimed he a was personnel of the Police Unit of Special Weapon Tactical Team (SWAT), from the Mobile Police Force 19-unit, River State.

“Even though the uniform and tags in his possession bear One Sergent Ebenezer Ojeh with ID No 456647, we are yet to confirm his true identity and his mission in Borno since he claimed to work in Rivers State”

The Court D’Apeal in Cotonou, Benin Republic, had on Thursday adjourned the trial of Igboho till Monday, July 26.