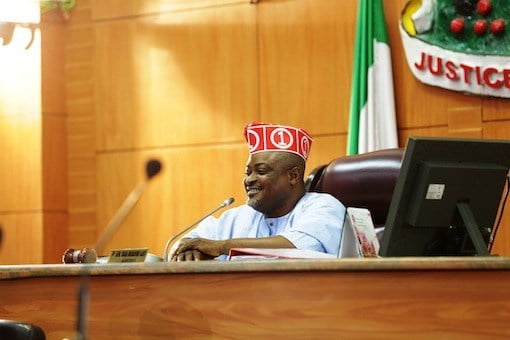 A lawyer, Yakubu Arowoshola Eleto, has accused policemen and security personnel attached to the Lagos State House of Assembly Speaker, Mudashiru Obasa, of beating him up.

In his personal account sent to SaharaReporters. the lawyer claimed that the incident occurred last Thursday.

According to Eleto,he had instituted an action against the Lagos Assembly and the state’s Electoral Commission (LASIEC) over the ongoing local government election in the state.

He stated that the ex parte application was refused and the judge had asked him to put the defendants in notice.

“Both LASIEC and LSHA were served the copies of the court processes on the 9th and 12th July 2021 respectively. The copies for the house of assembly were received by the office of the clerk on the 12th day of July by 8:30am. The suit in question with no: FHC/L/CS/741/2021 came up for hearing on the 12th day of July 2021 where I and three other lawyers represented the applicants.

“The court later instructed us to put the defendants on notice and further adjourned till Monday, the 19th day of July. I tried getting the ruling from the court but it was not made available to me, even till Thursday, 14th July 2021.

“Upon getting to the assembly gate around 11am on the 16th day of July 2021 to submit the letter and court ruling, I met a Paramilitary officer who told me point blank that they didn’t receive correspondences on Fridays.

“I engaged him further, by informing him that it’s not a correspondence per se but a letter notifying the law-making body in Lagos State that there would be a court sitting on Monday, 19th, July 2021 and the LSHA is a necessary party to the suit. The paramilitary officer quickly called the attention of the head of the securities on duty and he attended to me requesting whether he can be availed a copy of the letter, which I did immediately.

”I informed him that the matter was coming up on Monday, therefore the option of coming back on Monday will defeat the purpose, so I would wait instead. Suddenly, I saw a tall dark young man (later identified as the Chief Security Officer to the Speaker) approaching the gate from the assembly complex.

“I noticed the CSO returned with eight mobile policemen. The CSO said it point-blank that I came to the assembly with a destructive mission and that he had the instructions to deal with me. He, therefore, asked them to seize my phones, forcefully collected my pens, dragged my shirt, pulled me in the company of the mobile policemen and carried me to the assembly gate into a waiting police van with plate no RRS 387 LA.

“They eventually dragged me on the floor, tear-gassed me, poured pepper spray on my face, brutalised me, dehumanised me and forcefully made me enter the car identified above, and whisked me in a commando manner to the Alausa Police Station where I was kept behind the counter till I became unconscious.

“Upon regaining my strength, I requested for my phone to call my other colleagues, the police woman on duty at Alausa Police Station, obliged me my phone, and I called four of my colleagues and asked them to reach out to our seniors in the bar to wit; Mr. Femi Falana and Chief Wahab Shittu.

“Immediately, they heard the names I called they asked me to stand up, I didn’t respond as I had no strength left, they ransacked me once again, gave me dirty slaps, used metals on my joints, used their gun to hit me on my thigh while mentioning that I was proving stubborn.

“I became seriously weak, they carried me once again into their van and took me to an unknown destination. They later drove me around Ikeja and back to the House of Assembly, where I was locked in the car with a plate number RRS 387 LA for several hours.”

He added that the policemen later came back later in the night, returned all his belongings and asked him to go.

“I left the assembly and went home with stains and pains all over my body. It was a tough experience and the above facts are within my knowledge,” he said.