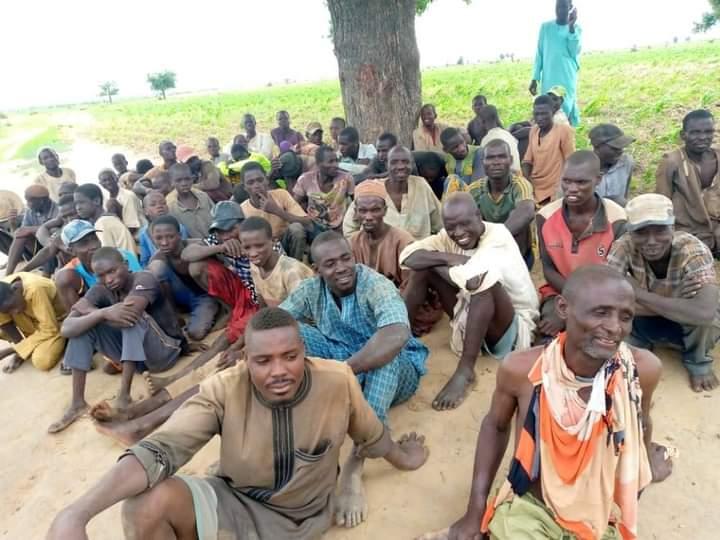 A dreaded bandit in Zamfara State, Turji, has reunited with his father, days after he was arrested by security agents in Kazaure, Jigawa State.

Naija News reports that the father was said to have relocated to Jigawa State after he failed to dissuade his son from his criminal ways.

He was arrested two weeks ago following a tip-off by an informant from a rival gang who told security forces that the father was trading in cattle stolen by the son’s gang.

Protesting his father’s arrest, Turji and his men kidnapped residents of Kware, Kurya, Badarawa, Keta and Maberaya in Zamfara state over the weekend.

However, it was learned that the bandit has received his father from mediators on Sunday afternoon and has also released villagers and travellers abducted by his men.

A source told Daily Trust that Turji agreed to release the abductees as part of a wider mediation process initiated by the federal government as an alternative resolution strategy to tackle rural banditry.

“He released the villagers unconditionally because of the pleas by mediators who are bringing key bandits to the table with the government,” a security source who is part of the new process, said.

In an audio clip obtained by Daily Trust, on Sunday, Turji was heard promising to release all the people and animals taken by his men once his father was brought back to him.

“Let them give you my father. Once you brought him to Bayan Ruwa, I assure you every one of the abductees and all the animals in my custody will be released,” he told the caller who is a prominent community leader in Shinkafi.