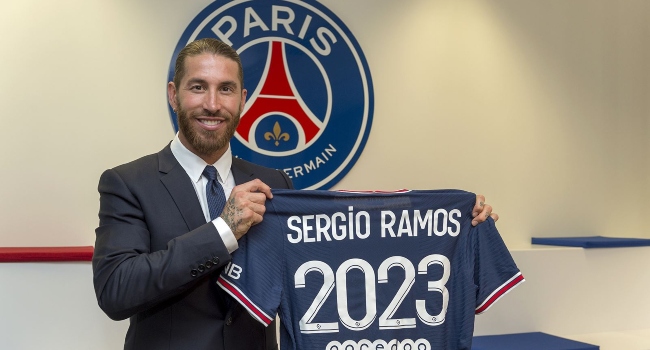 Ramos who is considered one of the best defenders in the world won the Champions League four times with Real and also won the World Cup with Spain.

The former Real Madrid defender who won 180 caps and scored 23 goals for his country, joined PSG to help them seal their desire to win the UEFA Champions League title.

“It’s a big change in my life, a new challenge and a day I shall never forget,” Ramos said in a PSG statement.

Ramos, who cut his teeth with Sevilla before joining Real in 2005, played almost 500 games for Los Blancos, marshalling their defence for 16 seasons and winning La Liga five times.

He also scored some notable goals not least his injury-time equaliser in the 2014 Champions League final against city rivals Atletico.

Real went on to win 4-1 to claim their tenth win in the competition and Ramos remained a mainstay of the side as they made it four continental titles in five seasons between 2016 and 2018 under French coach Zinedine Zidane.