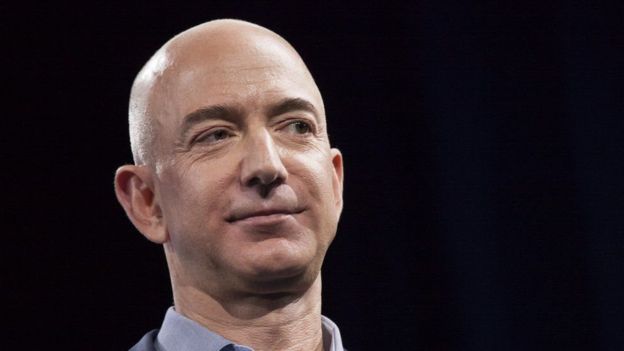 Amazon President Jeff Bezos, already the richest man in the world, has set a new personal net worth record by surpassing $211 billion.

Bezos, 57, gained $ 8.4 billion in net worth on Tuesday alone, according to the Bloomberg Billionaires Index, as Amazon stock rose 4.7% following the Pentagon’s announcement of the cancellation of the $ 10 billion JEDI contract with Microsoft.

It propelled Bezos above the previous record of $ 210 billion, held briefly in January by Tesla CEO Elon Musk, who saw his fortune decline and now only holds $ 181 billion, which puts him in the second position after Bezos.

While Tesla shares have fallen nearly 10% so far this year, Amazon shares have continued to soar, adding 15.4% since January 1.

Amazon stock rose 4.7% on Friday after the Pentagon announced the cancellation of the $ 10 billion JEDI contract with Microsoft

The surge in Amazon stocks has swelled the fortunes of Bezos, who stepped down as Amazon chief executive on Monday, handing over the reins to his veteran lieutenant Andy Jassy.

The 10 richest men in the world

Bezos is now assuming the role of executive chairman of Amazon. He still owns around 51 million shares of Amazon, a position that makes up the vast majority of his wealth.

His earnings on Tuesday broke the wealth record since the Bloomberg Index began tracking billionaire net worth in 2012, making Bezos the richest man in modern history.

Adjusted for inflation, historical figures such as 19th-century John D. Rockefeller (worth $ 350 billion in modern dollars) could be considered richer.

Deeper into history, some historical rulers controlled almost incalculable wealth. Mongolian warlord Genghis Khan, for example, had an estimated peak net worth of hundreds of billions of dollars.

Amazon shares rose sharply on Tuesday after the Pentagon cancelled a contract with Microsoft that was forged under the Trump administration.

The contract was suspended after Amazon filed a lawsuit against then-President Donald Trump’s decision, alleging that the former president improperly pressured military officials to move the contract away from Amazon.

Amazon argued that the deal was tainted with politics, particularly Trump’s antagonism towards Bezos, owner of the Washington Post.

Amazon said that in 2019, the Pentagon’s decision was full of “glaring errors,” which it said resulted from “inappropriate pressure from Trump.”

The company cited a 2019 book that reported that Trump asked the Defense Department to “fire Amazon” from the JEDI contract.

The cloud computing service contract could ultimately have been worth $ 10 billion for Microsoft.

Instead, the Pentagon will pursue a deal with Microsoft and Amazon and possibly other cloud service providers.