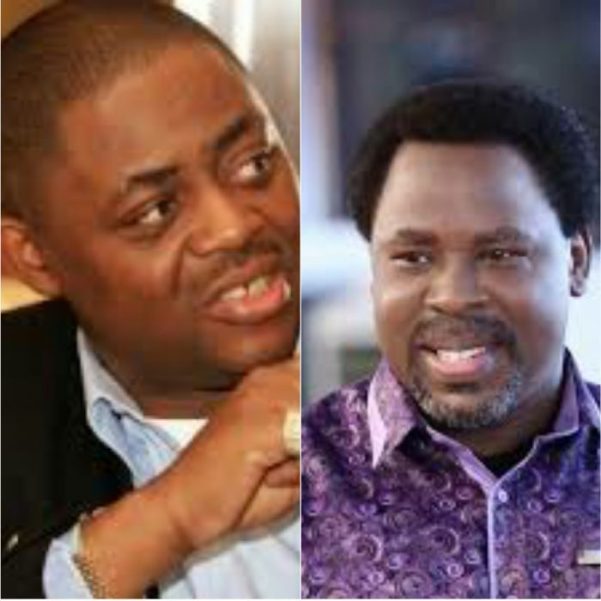 A former Minister of Aviation, Femi Fani-Kayode, has revealed how Prophet TB Joshua, the late founder of the Synagogue Church of All Nations (SCOAN), predicted his release from prison.

Fani-Kayode stated that in 2016 TB Joshua told him that he would be released from prison and it happened.

The former minister stated this on Monday  during the funeral rites of Joshua, who died on June 5, 2021.

“I know of at least 8 people that Prophet TB Joshua prayed into power. He had friends everywhere and many loved him.”

“When I was in Kuje cell in 2016, TB Joshua called me and told me that I was going to be released from the cell in three days.

“Before then I had never had any encounter with him, we had never met or spoken before. True to his words, three days later, I was released. Since then, I have never returned back to the cell and I will never return,” he said.

Other dignitaries at the occasion were Otunba Gani Adams, Aare Onakankafo of Yorubaland, who hails from Joshua’s Akoko in Ondo State; King Willard Mswati Gomani of Malawi, Nollywood stars, Femi Branch and Ronke Oshodi Oke, among others.

Meanwhile, the arrangements have been made in Arigidi Akoko in Ondo State for another burial ceremony as a sign of respect to the late Pastor TB Joshua.

Naija News understands that the late founder and senior pastor of the Synagogue Church of All Nations hails from the community, and hence the Akoko people are ready to pay him their last respect.

The Monarch of Arigidi Akoko, Oba Yisa Olanipekun, disclosed this on Tuesday, July 6. The traditional ruler said sympathisers would also gather at the Gani Fawehinmi Freedom Arcade ground in Igbatoro Area of Akure, the state capital to watch the burial event.