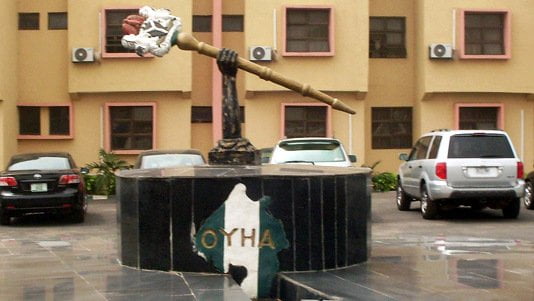 The Economic Financial Crime Commission (EFCC) has quizzed the Speaker of Oyo State House of Assembly, Hon. Adebo Ogundoyin and some other leaders of the House over alleged N1.03 billion purchase of refurbished vehicles.

Naija News understands that the anti-graft agency invited the lawmakers who were involved in the purchase around 8 am on Thursday and were released around 7 pm the same day.

A source close to the Assembly confirmed their arrest to SaharaReporters in Ibadan on Sunday but refused to give the names of the lawmakers arrested.

He said he knew the Speaker of the House, Ogundoyin was fully involved in the purchase of the vehicles, adding that the supplier of the vehicles was his close associate.

Recall that a former prosecutor with the Special Presidential Panel on Recovery of Public Property, Tosin Ojaomo, had in January this year petitioned the anti-graft agency over allegations of a scam in the purchase of about N1.03 billion worth of official cars for the lawmakers.

According to the petition dated December 7, 2020, the contract, which was executed by a firm (name withheld), was for the procurement of 33 Toyota Camry cars for the House members and the Clerk at N759 million as well as two Toyota Hilux pick-up vans for the Speaker, Adebo Ogundoyin, at N40m.

According to the petition, two Toyota Prado Land Cruiser SUVs valued at N106 million were also purchased for the Deputy Speaker, Abiodun Fadeyi and as Ogundoyin’s back-up vehicles, the petition stated.

Ojaomo, in his petition, alleged that the contract was for the supply of new 2019 vehicle models but noted that refurbished models with cleaned-up mileage were supplied instead.

The lawyer claimed that the contract was fraudulently arranged to favour the contractor instead of Elizade Motors and Mandilas Motors which also tendered quotations.

He added that the alleged scam was discovered when some of the 33 cars supplied by the contractor started having mechanical and electrical problems a few days after delivery to the lawmakers.

Ojaomo, therefore, in the petition asked the EFCC to recover the full contract sum from the firm.