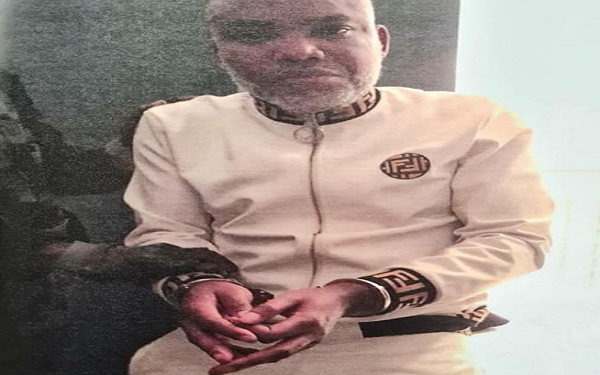 The World Igbo Congress (WIC) has asked the Nigerian Government to ensure that the leader of the proscribed Indigenous Peoples of Biafra (IPOB), Nnamdi Kanu, is safe.

Naija News reports that Kanu who jumped bail in 2017 was rearrested and brought back to Nigeria on Tuesday.

But in a statement signed and issued by its chairman, Anthony Ejiofor and spokesperson, Basil Onwukwe, the WIC urged the government to protect the rights of the secessionist leader.

The group also urged the federal government to treat the IPOB leader according to universally accepted laws.

It also called on the government to ensure that Nnamdi Kanu is treated in accordance with the rules and international conventions that guarantee that his rights and personal safety are protected.

The WIC, however, claims that the Biafran agitator was not captured in the UK and called on the British Government and the international community to investigate the circumstances surrounding Kanu’s rearrest.

The group also called for the protection of the rights of Ndigbo and asked the government to ensure fairness and justice at all time.

The statement read in parts: “The UK government needs to investigate the collusion of any other country or party in this saga,” the Igbo group further stated.

“The government of the US, the UN and the international community to take note of the ongoing abuse of human rights in Nigeria including this matter of abduction of Nnamdi Kanu.”

“The world has taken notice of the disparity in the treatment of Boko Haram insurgents and Fulani herdsmen who have been designated as terrorists by known international agencies.

“These killers are routinely arrested, compensated, released, and oftentimes absorbed into the Nigerian security services. On the other hand, the Igbo has been subjected to massive shoot-at-sight order, arrests and abduction. We would like to emphasize that no government in the world or any international security agency has designated IPOB as a terrorist organization and Nnamdi Kanu is not on any terrorist watchlist anywhere in the world.”