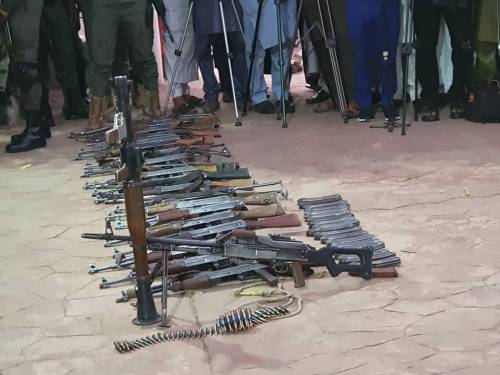 The Senate has passed an amendment bill seeking to increase the fine for the illegal importation and sale of firearms, from N1,000 to N1 million.

Naija News reports that the Red Chamber passed the bill titled, ‘Firearms Act 2004 (Amendment) Bill 2021’, on Wednesday after it considered the report of its committee on Judiciary, Human Rights and Legal Matters.

The new amendment altered some sections of the old act in order to increase the sanction for illegal arms dealers.

Section 35 of the extant act was also amended to impose a fine of N3 million or imprisonment of three years — or both — on anyone who failed to surrender illegal firearms to relevant authorities whenever so directed.

The amendment bill also altered sub-clauses 4 and 5 of clause 39 to allow firearms that are not of military serviceable grades, but are serviceable, to be deployed for use by civilian joint task forces and registered vigilance groups.

However, the Senate said this should be done with the approval and supervision of the office of the national security adviser.

The Chairman of the committee, Senator Michael Bamidele, during the presentation of the bill, said the N1,000 fine in the extant act was not punitive enough to deter illegal importation and sale of firearms.

Bamidele noted that the bill gives other law enforcement agencies, besides the police and military, the power to seize and destroy confiscated illegal firearms.

He said the bill was necessary in the wake of the proliferation of firearms and attendant insecurity challenging the country.

“The fine was pegged at N1,000 in the extant Act which was not punitive enough to deter illegal importation and sale of firearms,” he said.

“Clause 39 of the bill, which deals with power to seize and destroy confiscated illegal firearms, was amended to provide for the inclusion of other law enforcement agencies besides the police and the military.

“This is necessary because the power to confiscate or seize illegal firearms should be all-inclusive and not limited to a particular arm of force or law enforcement agency.”