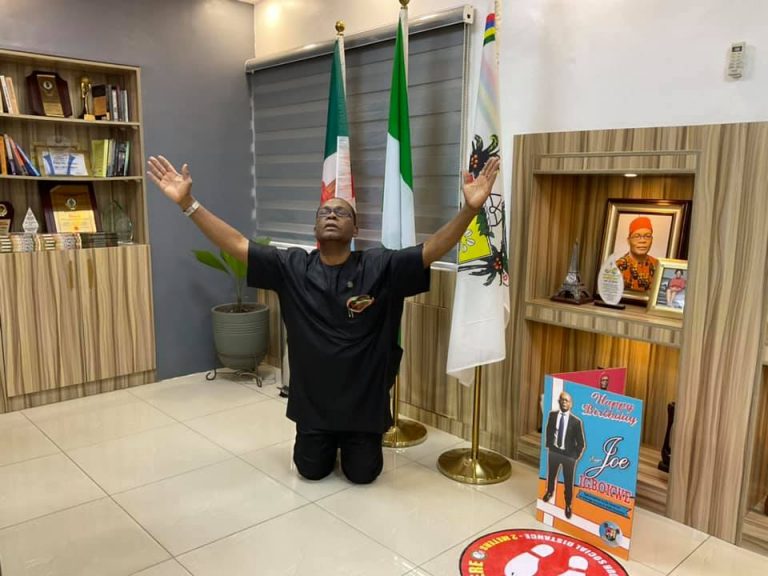 The Special Adviser to Lagos State Governor on Drainage and Water Resources, Joe Igbokwe has revealed why he was so happy when he discovered Nnamdi Kanu had been arrested.

Igbokwe revealed that Kanu had threatened to kill him and his children because he openly opposed him on the issue of the actualization of a sovereign Biafra nation.

He alleged that Kanu sent thugs after him and his family which made him live in constant fear.

It will be recalled as earlier reported by Naija News that Igbokwe was elated about the news of Kanu’s arrest, taking to social media in worship mode to praise and thank God.

Revealing more details of why he openly celebrated the arrest of the IPOB leader, Igboke explained that he had suffered a lot in the hands of Kanu and had been living in constant fear before God saved him with Kanu’s eventual arrest by the federal government.

Igbokwe added that apart from him and his family, Kanu also threatened to deal ruthlessly with anyone including governors, political leaders, and traditional rulers who opposed his style and agitation for Biafra.

He wrote in a lengthy post; “Nnamdi asked his boys to behead me anywhere they see me. They did not spare my Children as they extended the same fatwa to them. He also did not spare the names of every other person who speaks against him dream land, Biafra. While they were looking for me I sort the face of God hours on end because I know that to kneel is to win. It was a big battle.”

“Friends were calling me , family members shouted from the roof top that I should lie low. My Children said I was putting them in constant danger. My wife complained and shouted but when she discovered that I cannot change she resorted to seek the face of God also.”

“My family lived in fear. When they could not get me they resorted to calling my phones to pour invectives. They threatened my Children at the drop of a hat. On my Facebook page the Children of Hate Nnamdi Kanu trained and nurtured for years in abuse and hate, bigotry, primordial sentiments, ethnic preoccupation will come in their thousands to rain abuses with all kinds of unprintable words.”

“They cannot even read what you wrote to understand the trajectory . I endured it all. When they noticed that I am not bothered they resorted to propaganda and heckling. First they said I was jogging in Lagos and collapsed and died. Secondly they said I was beaten up in Lagos by IPOB members. Just last week after they came up with the same story that I was beaten up again. In quick succession they said my house in Nnewi has been burnt down. All these were triggered to weaken my resolve but they do not know me. When I believe in something I hardly give up.”

“Now what is my offense? I do not want Biafra and I gave 20 reasons why it cannot stand in the 21st Century. I said that Igbo have not spoken and Nnamdi is a baby to dictate the fate of 40 million Igbo in Nigeria. Nnamdi never liked this. At a time I asked for a debate and he said I am too small to face him.”

“Nnamdi carried on with his suicide mission and today I cannot tell the number of young Igbo men that have been wasted in the last one year. In the last two months hundreds of youths lost their lives in the most gruesome manner. I warned but nobody paid attention. The elders kept quiet for fear of being killed by Nnamdi Kanu’s killer squad. Even the Governors in the South East could not speak for fear of being attacked . Governor Hope Uzodimma who spoke suffered unmitigated disaster and assault. I did videos to warn of the impending danger and they got more angry and digged deeper.”

“On Sunday June 27 2021 Nnamdi Kanu was extradited to Nigeria to give an account of his deadly activities. We are assembling all his videos, all his atrocities, all his verbal assaults on Nigeria and Nigerians, the brutal killing of more than 100 policemen in the South East alone, the burning and destruction of Police stations, breaking of prison gates to set the prisoners free, killing of ordinary Igbo who did not believe in their antics, stealing openly of peoples properties, burning trucks and goods, attacking other Nigerians at the drop of a hat, killing of Gulak in Imo State, illegal possession of arms, formation of IPOB army , ESN etc.”

“Nnamdi will tell us a lot in the courts in the days ahead when the chips are down. Obviously he has a lot to say. I am just thanking God. It could have been worse but God saved me from Nnamdi Kanu’s leeches. An Endless Alleluia!!!”