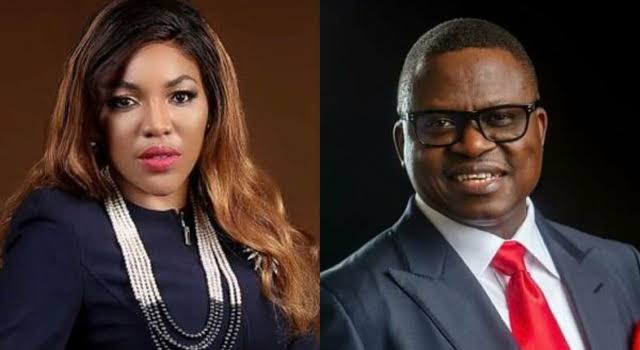 The Former Managing Director of Niger Delta Development Commission, NDDC, Timi Alaibe, has debunked the report making rounds that he is in a relationship with the wife of the late Super TV CEO, Usifo Ataga, Brenda.

Alaibe in a statement he personally released described the allegation levelled against him as baseless and mischievous.

The former director of NDDC noted that he never met Brenda nor have any relationship with her.

He noted that the report was the handwork of some individuals whose mission was to tarnish his image.

The statement read, “My initial reaction was to ignore this nonsense. But in the past 24 hours, I have been bombarded with telephone calls and messages from friends within and outside the country. Why? In the early hours of Saturday night, someone had sent me an anonymous, demonic-sounding social media post linking me with the wife of Michael Usifo Ataga, the late Chief Executive Officer of Super TV.”

“The insane, unknown writer of the unthinkable falsehood stated that Ataga’s wife left the husband to be my mistress; and that the late Ataga had physically confronted me; and that the woman is a household name among my friends.”

“The writer added that the woman is also my “official mistress” in “social circle and class.” The writer went ahead to state that I already have a child from the woman whose DNA matches mine.”

“I do not understand why a human being with blood in his veins would sit down and conceive such destructive lies just to rubbish not only my person but to smear the integrity of the woman in question.”

“Up till this moment, I do not know the woman called Mrs Brenda Ataga; not to talk of having any relationship with her. I wonder why the husband to someone I have never met would confront me about his wife, or how a woman I do not even know would have a child for me! This is utter rubbish because I have never had any business with this woman or the late husband at whatever level. That is the truth as God knows it.”

“I am warning whoever is behind this devil-driven, destructive agenda to stop it. Don’t ever think you are hidden. God is watching you. Circulating ruinous falsehood in social media about innocent persons just to rope them into a crime or dent their image will do you no good. I challenge the person behind this tar-brush to make public any verifiable evidence to corroborate this falsehood. My conscience is clear”