The Edo State Police Command has arrested two hunters in Ama Community for unlawful possession of a firearm.

In a press statement on Sunday, the Commissioner of Police Edo State, Phillip Aliyu Ogbadu, said the Divisional Police Officer Agbede Division, CSP Iredia Ogiata, received information that there is an ongoing shooting at Ama Community.

On receipt of the information, Ogbadu said the DPO said he swiftly mobilized police operatives from the Division to the scene of the incident.

Upon arrival, a preliminary investigation revealed that one John Ebatame and Moses Okoyomon were said to have used a double-barrel gun to shoot at six persons in the community during a burial ceremony of one late Martina Rabi.

The investigation further revealed that John and Moses followed the corpse from Ubiaja in Esan South-East LGA to be buried in Ama Community. 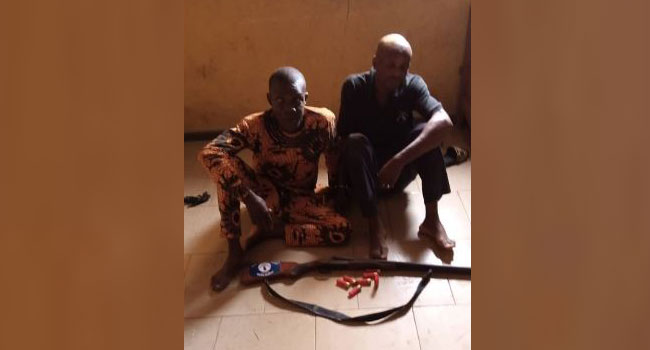 It added that John is said to be a hunter in Ubiaja, Esan South East LGA followed them from Ubiaja to the area where he fired gunshots into the air which resulted in the cutting-off of the community electricity cable.

The Youths of Ama Community on noticing that he has destroyed their electricity cable confronted him immediately, and in the cause of the argument, John threatened to shoot at them.

However, he eventually did that resulted in injuring five persons namely; Mathew Enebor Sule Kadiri, Christian Okpoke, Momodu Ambrose, and Ibadan Okhere and one other whose name is unknown at this time.

The injured persons are currently receiving treatment at Irrua specialist teaching hospital. The following exhibit recovered from them, “one double-barrel gun and seven expended cartridges”.

Ogbadu warned that no matter how highly placed an individual may be in society if they commit an offence or threaten the life of another person, they will be made to face the wrath of the law.

He enjoined the good people of Ama Community not to take laws into their hands as an investigation into the incident has since commenced.

The police chief also noted that under his watch the Force will not tolerate any act of lawlessness in the state.

He called on the good people Edo state to continue to furnish the police with credible information at any time so as forestall any breakdown of law and order.