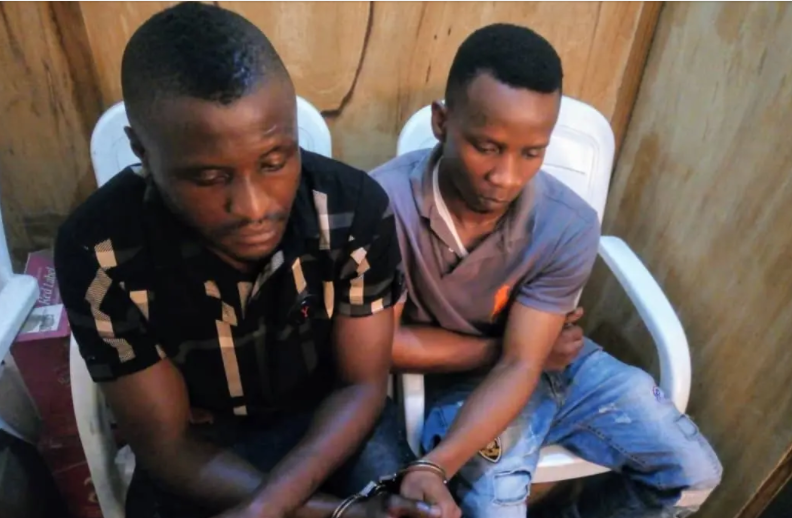 A former player of Abia Warriors Football Club of Umuahia, Daniel Orji, has been arrested for selling fake drugs.

Naija News reports that Orji was arrested by operatives of the Federal Competition and Consumer Protection Council (FCCPC) for selling fake eye drops and other medicines.

While answering questions from journalists, the player lamented how a serious ankle injury pushed him out of football and forced him into dealing with fake drugs.

He said his last participation in active football was in 2020 when he suffered a serious ankle injury while playing for Abia Warriors against Wiki-Tourists of Bauchi Football Club.

Orji, who was arrested with his companion, Okechukwu Obinna, confessed to selling the concoction but stressed that he and his companion were yet to sell the product to anybody before they were caught.

He said, “I came across Jenkins Foundation when I was injured while playing for Abia Warriors in a match against Wiki Tourists of Bauchi in 2020 and someone recommended their balm to me, saying it is affective.

“I used it and it worked for me, because I was relieved but some time later, the injury came back and I had to drop from football having nothing to do.

“Unable to secure a club, I called someone in Jenkins Foundation explaining my ordeals and situation to him, he asked me to get a hall I can pay for so they can be supplying their products to me to sell.

“I have also sold these type of products for another Foundation called Chi-Foundation in my LGA Umunneochi, but this is the first time I am opening my own.”

Explaining how they were arrested, FCCPC Abia Chairman, Nnabugwu Chidi, said his men caught Orji and Obinna right in the act of selling the mixture of vegetable oil and other substances as eyedrops.