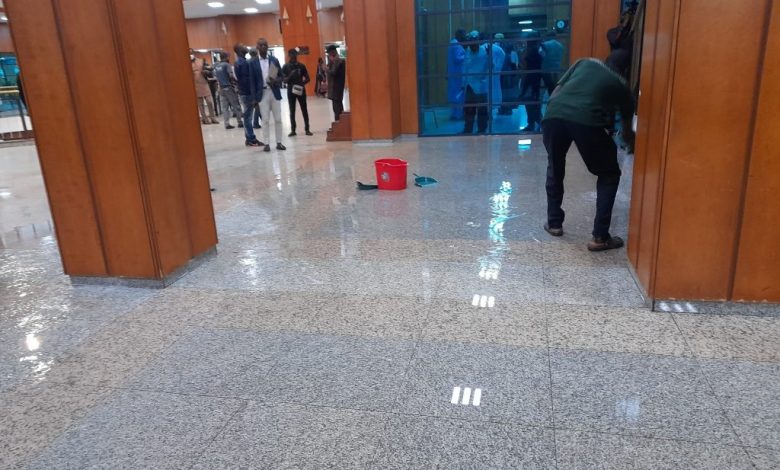 The Nigerian Senate on Wednesday said that the National Assembly is not responsible for the maintenance and renovation of the complex.

Naija News had reported that activities at the Senate hallowed Chamber were on Tuesday morning disrupted following the heavy leaking of the complex roof.

Following the leaking of the roof, Senators who were already at the chamber were forced to come outside, discussing in groups.

National Assembly staff have in the last couple of minutes packing the water with buckets and Packers, just as the entire environment, fora is covered with water.

Reacting to the incident in a statement on Wednesday, Senate spokesman, Senator Surajudeen Ajibola Basiru, said that no money has been released for renovation purposes.

Ajibola, however, noted that a sum of 37 billion Naira was released to renovate the decaying nature of the National Assembly Complex.

He added that the leadership of the National Assembly has called for urgent intervention in revamping the dilapidated structures within the complex.

“It must be reiterated that the National Assembly Complex is a National Monument which falls under the purview of control of the Federal Capital Development Agency. In essence, the FCDA is responsible for its maintenance as well as renovation and not the Leadership of the National Assembly as being falsely bandied about.”

“The leakage witnessed at the foyer of the National Assembly yesterday justifies the apprehension of the leadership of the National Assembly and the FCDA and further underscores the need for an urgent intervention in revamping the dilapidated structures within the complex before it falls into further dilapidation with the attendant huge cost of possible replacement.”