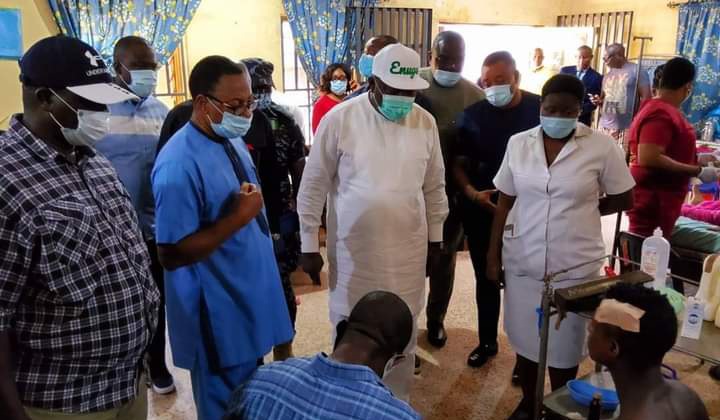 The Enugu Police Command has confirmed the arrest of a police inspector who killed five persons and injured four others during a shooting spree on Sunday.

Confirming the incident in a statement by its spokesman on Sunday night, Daniel Ndukwe, the command said the police officer has been arrested pending the conclusion of an investigation.

Ndukwe noted it was unclear what led the officer to attack a neighbourhood in Golf Estate, GRA, Enugu, and began to shoot sporadically.

According to the command’s spokesman, the police officer is attached to a lottery company in the area.

Ndukwe, however, noted that the injured victims are currently receiving treatment at the Enugu State University Teaching Hospital.

He added the state Commissioner of Police, Mohammed Aliyu, sympathised with the family and friends of the deceased persons and urged them to remain calm while the police conclude their investigation.

Ndukwe also urged residents who witnessed the incident to come forward with information.

The statement reads: “The state’s Commissioner of Police, Mohammed Aliyu, has ordered the deputy commissioner of police in-charge of the State Criminal Investigation and Intelligence Department to carry out thorough investigation to unravel the circumstances surrounding the shooting incident.

“The incident involved a police inspector attached to the Special Protection Unit (SPU) Base 9, Umuahia, Abia, and said to be on duty at a lottery company located within the Golf Estate.

“The commissioner made the order after visiting the hospital where four of the persons said to have sustained gunshot injuries are receiving treatment.

“Five others, whose injuries were critical, have been confirmed dead by doctors on duty and deposited in the mortuary for autopsy.”