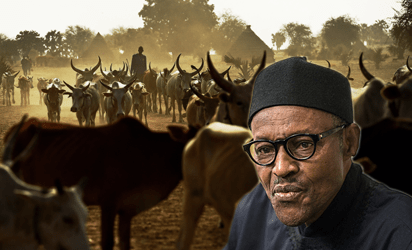 In spite of massive backlash from Nigerians, the Muhammadu Buhari-led Federal Government has begun moves to retrace and recover grazing routes across the country.

Naija News recalls that 17 southern governors had after a meeting in Delta State imposed a ban on open grazing in the region.

But President Muhammadu Buhari had directed states to revive cattle grazing routes across the country.

The president stated this during an interview with Arise Television which was aired on Thursday.

He disclosed that he has asked Nigeria’s Attorney General, Abubakar Malami to begin the process of recovering land from persons who have converted cattle grazing routes for their personal use.

Buhari said the grazing routes were designated in the 1st Republic when “Nigerians use to obey laws” but those routes had been converted.

“What I did was ask him to go and dig the gazette of the 1st Republic when people were obeying laws,” he said.

READ ALSO  If Boko Haram has been cleared from Sambisa, where are the Chibok girls? – Cardinal Onaiyekan

Many Nigerians including governors from northern and southern parts of the country have kicked against the federal government’s plan.

The Federal Government said this was meant to address the clashes between herdsmen and farmers.

Although some of the routes are believed to have been encroached upon due to human activities, the government had embarked on a process of identifying monuments along the routes in order to get them back as locations for cattle grazing.

Officials of the Federal Ministry of Agriculture and Rural Development on Friday confirmed to The PUNCH that the routes’ recovery would go on.

They also stated that routes that had been encroached upon as a result of the development of public infrastructure might be left out of the recovery exercise.

The acting Director, Animal Husbandry Department, FMARD, Winnie Lai-Solarin, stated that while cattle ranching had been one of the major options canvassed for herders, not every pastoralist would be able to afford ranching at the moment.

She said, “There are some stock routes that we have across the country, and in the past, we had monuments along these stock routes, particularly the primary stock routes.

“And in the course of farming or other human activities along those stock routes, the monuments were altered, but we know where they are. So we are saying that some of them can be retraced.

“And this is particularly for areas that are not encroached upon as of now. The pastoralists know the routes, and on some of those routes, you will see the pieces of the monuments along them.”

Lai-Solarin added, “So for those that are not encroached upon and are not in conflict zones, we will go ahead to retrace and guide the pastoralists along them. We didn’t get to where we are today in one day and so we cannot expect that every pastoralist should suddenly start ranching now.

“Some would still have to move but let’s keep the movement as safe as possible and in areas that are not conflict zones. That is what I am saying. We are not going to retrace stock routes where there are infrastructures that are for the public good.”