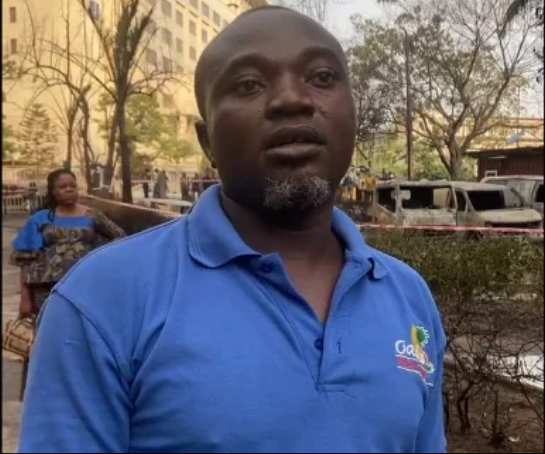 Mr Peter, one of the survivors of a gas explosion that rocked Mobolaji Bank Anthony Way, in the Maryland area of Lagos State on Thursday night, has narrated how he escaped the horrible incident.

Naija News reports that three people were killed while 13 others sustained injuries on Thursday night in a tanker explosion in Ikeja, Lagos state. The explosion is said to have occurred around the Sheraton Hotel area, located on the Mobolaji Bank Anthony way in Ikeja.

Reports had it the impact of the explosion was felt inside buildings in the government residential area (GRA) axis of Ikeja.

Narrating the horrible incident which took lives and ravaged properties worth millions, Peter who spoke briefly with The PUNCH on Friday morning, said he was seated in a car on the premises of OPIC Plaza when he felt an unusual coldness of his feet.

According to him, he was resting in the vehicle after the day’s work at the plaza and decide to exit the car around 11 pm on Thursday to observe the situation. On coming out of the car, Peter said he saw a gas-laden truck stationed in front of OPIC Plaza and he was paralyzed with fear.

He said: “Before I could come out of the plaza and cross to the other side of the road, the gas had already filled the whole area. It was so suffocating that it was very difficult for me to navigate my way out of the gaseous environment.

Meanwhile, the acting coordinator, south-west zonal office, NEMA, Ibrahim Farinloye, told NAN that 13 persons were injured while 25 cars were destroyed as a result of the explosion.

He said the explosion was alleged to have been caused by leakage while the liquefied petroleum gas (LPG) tanker was in motion.

“The resulting fire travelled with the wind to the premises of Ogun State Property Investment Company (OPIC) Plaza besides Sheraton Hotels, which houses different commercial outfits including a Chinese Restaurant,” he said.

“The initial search and rescue activities revealed that 13 persons sustained various degrees of burns. Out of this, nine are males while four are females.”

Farinloye disclosed that the injured victims were taken to the Lagos State University Teaching Hospital (LASUTH).

He said four of the victims with severe injuries were later transferred to the trauma and burns centre at Gbagada General Hospital.