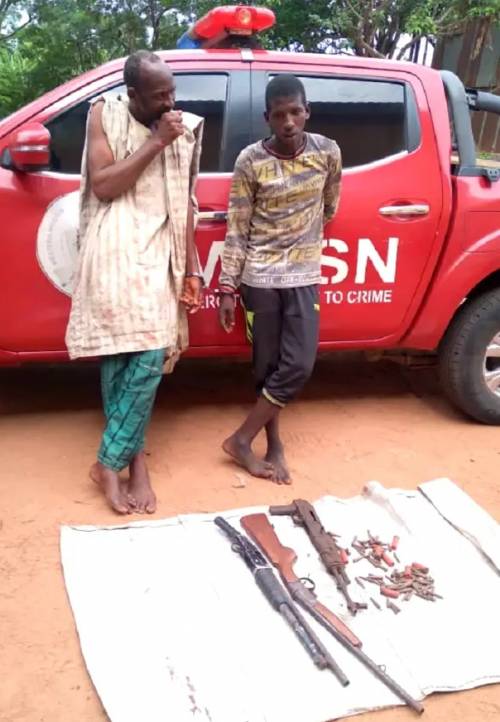 Naija News reports the arrest was made by operatives from the Ibarapa East Local Government Command of the security outfit.

The security outfit announced this in a statement via its media unit on Thursday, saying the suspected bandits were caught with dangerous weapons.

An AK-47 rifle, pump-action, a Dane gun, and some other items were recovered from the suspects.

While further investigation is ongoing, the two suspects have been handed over to the relevant authorities.

Meanwhile, more details have emerged on Thursday’s attack on Federal Government College, Birnin Yauri in Kebbi State, by gunmen suspected to be bandits.

Naija News had earlier reported that the attackers, who rode on motorcycles, were said to have stormed the school from neighbouring Rijau forest in the early hours of Thursday.

A teacher, who did not want to be named, told Daily Trust that the gunmen conveyed their victims in a bus belonging to a parent.

According to the school official, they had received information on a plan to invade Birnin Yauri community.

He said a detachment of mobile policemen were deployed last week to the school, to prevent the attack.

The teacher said when the bandits finally struck, the security operatives engaged them in a shootout but they were overpowered.

He said after abducting the victims, the bandits used a bus belonging to the parent of the student who came to the school to pick his son who was to write JAMB on Saturday, to evacuate the victims.

“All I can tell you now, is one of the policeman guarding the school was killed. Many of our students, both male and female, were abducted by the bandits. It is a co-education school, you know it is a Federal Government College,” he said.

“Three or four teachers of the college were abducted. Out of the abductees, there is a Vice Principal and a female teacher. Two students, a male and female, were said to have been shot by the bandits. The boy was shot on the buttocks while the girl sustained a gunshot injury on her arm.”