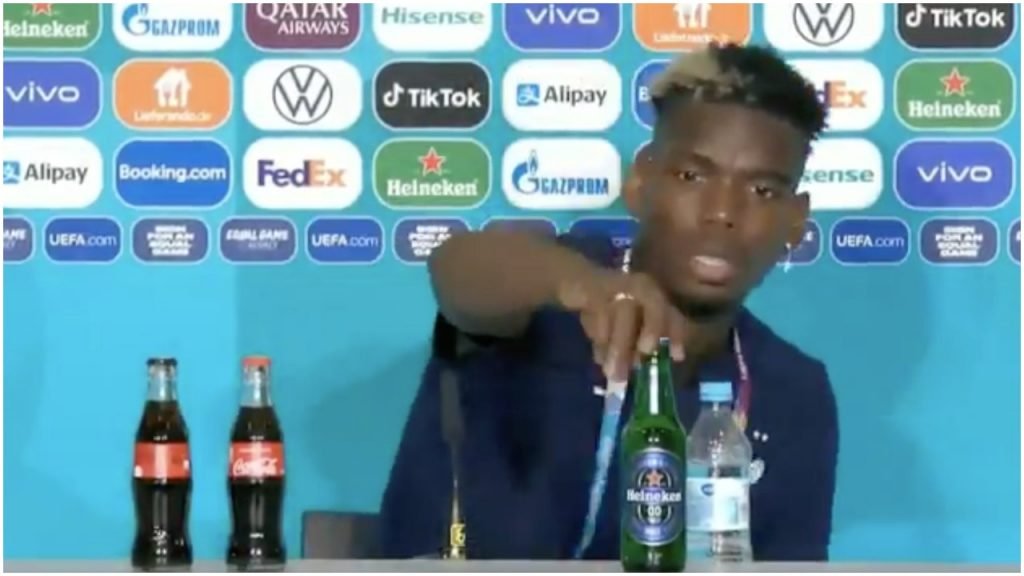 France and Manchester United midfielder, Paul Pogba, on Tuesday night removed a bottle of Heineken beer that had been placed in front of him.

Naija News reports that this was during a Euro 2020 press conference following his side’s 1-0 victory over Germany.

Pogba removed the bottle when he sat down to speak to the media after he was named ‘Man of the Match’ in France’s win against Germany.

While the former Juventus star offered no explanation for removing the bottle, it is likely because his religion considers alcohol ‘haram’ or ‘forbidden’.

Pogba also left a bottle of water and two bottles of Coke on the table untouched.

The 28-year-old grew up with a Muslim mother and says many of his friends are Muslim, but he did not begin practising the religion himself until 2019.

Recall that Juventus forward, Cristiano Ronaldo while speaking with journalists during a press conference spotted two bottles of Coca-Cola and immediately pushed them aside.

Ronaldo thereafter picked up the bottle of water that was on the table and said to the cameras: “Agua! (Water!)”.

The talented player at a time had spoken against sugary soft drinks, adding that he does not want his son to consume them.

According to Marca, the share price of Coca-Cola before and after Ronaldo’s action has led to billions of dollars in losses for the company.

The Spanish newspaper further claimed that the company went from being worth $242 billion to $238 billion – a “brutal 1.6% drop” for it on the stock market.